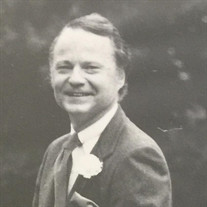 Alan Gordon Potter, 89, of Milford, passed away on Saturday, May 20, 2017 at Lakes Regional Healthcare in Spirit Lake. Formerly of Okoboji, Alan grew up in Fort Dodge. Funeral services will be held at 11:00 a.m. on Friday, May 26, 2017 at the Schuchert – Lentz Funeral Homme in Spirit Lake. Visitation will be one hour prior to service time on Friday at the Funeral Home. Burial will be in the Lakeview Gardens Cemetery in Spirit Lake. Alan was born December 9, 1927 to Delbert and Helen (Schwab) Potter in Algona. Six months later the family moved to Fort Dodge where Alan attended school, graduating from Fort Dodge High in 1945. That year Alan played quarterback for the Football team which was a state champion. He went on to study marketing at the University of Nebraska where he earned a Bachelor’s degree. This marked the beginning of his life-long following of Cornhusker football. His avid interest in sports also kept him tuned to the New York Yankees and for a time, a New York Giants season ticket holder. He had a passion for Jazz and first-love loyalty to the Big Band sound. On February 17, 1951 Alan married Ann Crawford of Omaha, NE in her home city. Soon thereafter he served his country in the US Army. Following his time in the Army Alan began work with IBM in Omaha, NE in 1952. In sales and marketing for the company he received promotions and moved with his family to Maryland, and back to Lincoln before a transfer to the headquarters in Armonk, NY. His career work kept him in the New York area until his election to take early retirement in 1984. One of his most significant areas of work involved the development of marketing programs for the scanners that are still in use in retail, beginning in the early 70’s. After six more years in computer related work he retired again, only to begin work in custom home building. He worked several more years with Better Home Builders, near home in Fairfield County CT. His lifelong interest in finish carpentry became his regular work. In 2000 he and Ann moved back to the Midwest to a family home in Okoboji. Here he enjoyed annual visits from his children, grandchildren, and regular family visitors. He enjoyed boating and the social activity of the Okoboji Yacht Club. He continued to do woodworking and gradually became involved in several community organizations. In later years he became active in “Meals on Wheels,” where bringing ready humor and personality to this noble service especially suited his nature. Alan is survived by his wife Ann Potter of Milford; son Stuart Potter of Saint Paul, MN; daughters Mary (Gary) Montanus of New Canaan, CT and Bonita Springs, FL, and Janet (John) Webb of Thousand Oaks, CA; and 9 grandchildren: Emily, Claire, Ellen, Edward, Lexi, Laura, Dana, Corey, and Grant. He is preceded by his parents, and brother, John. In lieu of donations the family asks that memorials be made to “Meals on Wheels” at the location of your choice.

Alan Gordon Potter, 89, of Milford, passed away on Saturday, May 20, 2017 at Lakes Regional Healthcare in Spirit Lake. Formerly of Okoboji, Alan grew up in Fort Dodge. Funeral services will be held at 11:00 a.m. on Friday, May 26, 2017 at the... View Obituary & Service Information

The family of Alan Potter created this Life Tributes page to make it easy to share your memories.

Alan Gordon Potter, 89, of Milford, passed away on Saturday,...

Send flowers to the Potter family.