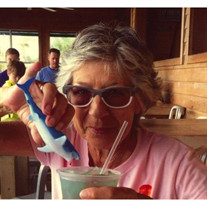 Alana Sue Bringle (Loni), age 67 of Spirit Lake, Iowa died Saturday, January 30, 2016 at her home in Spirit Lake following a three year battle with cancer. Loni was born January 4, 1949 in Storm Lake, Iowa; the daughter of Clyde "Chap" Iler and Dorothy (Littrell) Iler. Loni grew up in Estherville, Iowa and was baptized by her grandfather, the reverend E.N. Littrell as a Methodist and confirmed at the Estherville Methodist Church. Loni was united in marriage to Robert Morris Bringle on May 8, 1982 in Spirit Lake, IA and unto this union two boys were created. While Loni was initially a homemaker and mother, as the kids grew up she joined them, volunteering as room mother and later working for the Spirit Lake Community Schools in the media center and was a drama coach for 8th through 12th grades. While still working, Loni found time to volunteer around the community and brought passion, excitement, and fun to children and the elderly (her mother at the time stayed at Hilltop Care Center) that she was helping or mentoring. Her enjoyment came not just from her own children, but any child, often seeking out those who may have felt left out by taking special care in making them feel wanted and cared for. Loni also enjoyed working with wood, a skill she got from her father who was an excellent woodworker. She also had a knack for interior design, having remodeled several offices, homes, and business in the area. Another thrill for her was finding a bargain at a thrift store, antique store, or even a dumpster (she often called herself a dumpster diver). She always said that one man's trash is another man's treasure. Loni is survived by her husband, Robert Bringle; and her two sons, Brayden Bringle (and his wife Yumi); and Brock Bringle. She is also survived by her sister, Barbara Guge (and her husband Gary); her niece Kim (Guge) Nunez (and her husband Anthony) and their three children Olivia, A.J, and Keenan; and her other niece Wendy (Guge) Krieger (and her husband Luis) and their three daughters Megan, Hannah, and Gabrielle. She is preceded in death by her parents and grandparents. A memorial service for 67 year old Alana "Loni" Bringle of Spirit Lake, will be held at 2:30 P.M. Saturday, February 13, 2016, at the Pearson Lakes Art Center. Memorials given in Loni's name will be used to establish a scholarship. The Schuchert-Lentz Funeral Home is in charge of the arrangements for 67 year old Alana "Loni" Bringle of Spirit Lake.

The family of Alana "Loni" Bringle created this Life Tributes page to make it easy to share your memories.

Send flowers to the Bringle family.