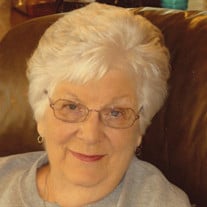 Anita C. Stockdale, 91, of Spirit Lake, died on Wednesday November 9, 2016 at the Lake Park Care Center following an extended battle with various health issues and Alzheimers disease. Memorial services will be 11 AM on Saturday November 19th at the First Presbyterian Church in Spirit Lake. Burial will take place at Harrison Township Cemetery in Swea City. Visitation will be 10 AM until service time on Saturday November 19th at the church. Anita was born October 21, 1925, the daughter of Dr. George A. and Teresa B. Johnson in Pomeroy, Iowa. She graduated from Pomeroy in 1942 and attended St. Olaf College in Northfield, MN and Iowa State College in Ames. She was married to Marvin W. Stockdale on November 17, 1944 in Hutchinson, Kansas while Marvin was undergoing flight training at the Naval Air Station in Hutchinson. During most of their marriage, they lived in Fort Dodge and after her three sons were away from home, she graduated from Iowa Central Community College in the Certified Dental Assistants program. She spent several years as a dental assistant in a dental office in Fort Dodge. Anita was an avid fan of handwork and did considerable crocheting, knitting and sewing. She completed crocheted afghans, gave as gifts dozens of crocheted place mats, knitted adult sweaters, and her last and most time consuming achievement included a queen size puff quilt. By using fabric saved from dresses her mother made for her as a girl, she designed the quilt with a blend of color and fabric to make a most beautiful quilt. Her family was most complimentary for her prepared food dishes and especially her talent for delicious pies. She was a member of the Presbyterian Church and currently a member of the First Presbyterian Church in Spirit Lake. Anita is survived by her husband; three sons, Ned A. (Joanne) Stockdale of Spirit Lake, William G. (Marilyn) Stockdale of Omaha, NE and Thomas L. (Peg) Stockdale of West Des Moines; nine grandchildren; and eight great grandchildren. She was preceded in death by her parents; a sister, Donna; and a brother, Paul. Memorials may be made in Anita’s name and directed to the Mayo Clinic Alzheimer’s Research Program, 200 First Street SW, Rochester, MN 55905.

The family of Anita Stockdale created this Life Tributes page to make it easy to share your memories.

Send flowers to the Stockdale family.