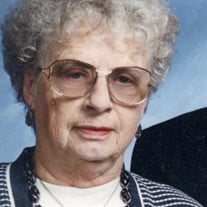 Arlene J. Anderson, 96, of Alta, IA passed away on Friday, December 22, 2017 at the Buena Vista Regional Medical Center in Storm Lake, IA. Funeral services will be held at 11:00 a.m. Thursday, December 28, 2017 at Trinity Lutheran Church in Alta, IA. Visitation will be one hour prior to the service at the church. Burial will be in the Scandinavian Cemetery in Alta, IA. She was the only daughter of Edward and Esther (Nelson) Rydstrom was born on June 11, 1921 on her family farm in Elk township, Buena Vista County, Iowa. She was baptized and confirmed at Trinity Lutheran Church, Alta, IA, where she was a member for 96 years. She attended Fairview school, graduating as valedictorian of the class of 1939. On February 1, 1942, she was united in marriage to Erik Raymond Anderson at the Trinity Lutheran Parsonage. To this union 3 daughters were born, Judy, Peggy and Kathy. Arlene was a dedicated homemaker, taught Sunday school and was very active in Trinity Lutheran church women where she attended Bible studies and made quilts for Lutheran World Relief. She sang in her church choir and sang duets and in quartets for programs and funerals. She was active in a local genealogy society where she researched her Swedish heritage. Along with her husband, she traveled to Hawaii, Nova Scotia, and Europe including the Scandinavian countries where she enjoyed visiting with their Swedish relatives and researching her Swedish heritage. Through her research she also found family in New Zealand. Arlene moved to Wel-Life in Alta in March of 2008, to Keelson Harbour in Spirit Lake in January of 2016, and back to Wel-Cov of Alta in September, 2017. She just wanted to come back home to Alta where she knew people and they knew her and she got her wish. She was preceded in death by her husband, E. Raymond, in 2008, parents, brothers, Lyle (Marjorie) Rydstrom and Dewayne Rydstrom, brothers-in-law Herbert (Dorothy) Anderson, and Glen (Carma) Anderson. Arlene is survived by her daughters, Judy (Rich) Englert, Peggy (Jim) Fliss, Kathy (Tom) Nelson, 6 grandchildren: Kristin (Shane) Gehrke, Kurt (Carrie) Englert, Molly Fliss, Maggie Fliss., Nicole (Eric) Stauffer, Melanie (Ja’Don) Cavil, 11 great grandchildren: Nolan Gehrke, Miles and Quinn Englert, Dionte and Derreon Fliss, Emelynn Toft, Cooper and Kobe Chindlund, Niles and Quincy Cavil, and Eden Stauffer along with nieces and nephews and friends.

The family of Arlene J. Anderson created this Life Tributes page to make it easy to share your memories.

Send flowers to the Anderson family.