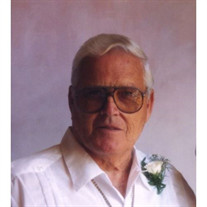 Benjamin R. Mardock, age 89, of Spirit Lake, passed away Sunday, October 20, 2013, at his home in Spirit Lake. He was born on January 26, 1924, in Eliza, Illinois, to James and Mary (Pratt) Mardock. Ben graduated from Cambridge High School in 1942. He was married to LaVon Pearson in Cambridge, Illinois, on August 30, 1946. LaVon passed away on April 3, 1983. Ben married Marjorie Paxton in Las Vegas, Nevada, on October 12, 1984. Marjorie passed away on October 14, 2012. Ben worked for the Henry County Highway Department for many years. He enjoyed spending his retirement years traveling with Marjorie. Ben is survived by his son, James Mardock, and his wife, Karen of Maple Grove, Minnesota; a granddaughter, Tracie Mardock of Vail, Colorado; a step-daughter, Sylvia Keenan, and her husband, Bruce of Spirit Lake; and a step-son, Ron Paxton, and his wife, Angela of Colorado Springs, Colorado. He was preceded in death by his parents; four brothers; two sisters; his wife, LaVon; his wife, Marjorie; and a son, Ben in 1987. A graveside service will be held on Monday, October 28, 2013, at the Rosedale Cemetery in Cambridge, Illinois. The Schuchert Funeral Home is in charge of the arrangements.

The family of Ben R. Mardock created this Life Tributes page to make it easy to share your memories.

Send flowers to the Mardock family.