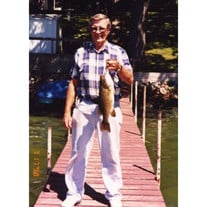 Bert F. Baldwin, age 83, of Spirit Lake, passed away Wednesday, October 30, 2013, at Lakes Regional Healthcare in Spirit Lake. He was born on July 15, 1930, in Algona, Iowa, to Bert B. and Beatrice (Dixon) Baldwin. Bert graduated from Algona High School in 1949. He was united in marriage to Charlotte Dremmel on February 12, 1955, in Burt, Iowa. Bert worked for Iowa Parcel in Des Moines for 29 years, Motor Inn for 8 years and the First Presbyterian Church for 13 years. He enjoyed spending his spare time fishing and bowling. Bert is survived by his wife, Charlotte Baldwin of Spirit Lake; his daughter, Lynne Barnhouse, and her husband, Joel of Redfield, Iowa; two sisters, Arlene Schumacher of Joliet, Illinois, and Ruth Heller of Spirit Lake; four grandchildren, Tenille, Tiffany, Hailee and Zachary; two great-grandchildren, Baylor and Jaxen; and many nieces and nephews. He was preceded in death by his parents; a sister, Alma Marshall; and son, Bruce Baldwin. A memorial service will be held at 11:00A.M. Monday, November 4, 2013, at the First Presbyterian Church in Spirit Lake. Visitation will be held Sunday, from 2:00P.M. until 4:00P.M. at the Schuchert Funeral Home. The Schuchert Funeral Home is in charge of the arrangements.

The family of Bert Baldwin created this Life Tributes page to make it easy to share your memories.

Send flowers to the Baldwin family.