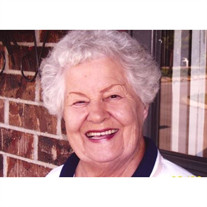 Betty Roy, age 86, passed peacefully, surrounded by her family, on January 21, 2015, at Hilltop Care Center in Spirit Lake. Betty was born on February 2, 1928, to her parents Alfred and Edith Ponder in Little Wigbourough, England. She spent her childhood with her parents and nine brothers and sisters on the Isle of Mersea playing and going to school. At the age of 14 she became a service worker for a local farm family. Betty married a soldier and moved to LeMars, Iowa in 1946, where she began raising her family, eventually settling in Arnolds Park. In 1963, Betty moved to Southern California with her children, where she became the first woman to line cook at a large chain restaurant. In 1974, Betty returned to make Arnolds Park her home once again, where she worked at Dickinson County Memorial Hospital as a cook until she retired. Betty was an avid gardener and loved to feed wild birds. She was a very skilled knitter and her family enjoyed many gloves, hats, sweaters, pillows, slippers, and stockings. She was honored with a huge purple grand prize ribbon for a hand knitted clown she entered in the Clay County Fair. She was a joyful woman who loved spending time with friends. She loved her family and enjoyed potlucks and picnics at the beach and of course made the BEST potato salad in the world. Betty was preceded in death by her parents; eight brothers and sisters; infant daughter, Tina Renee; and daughter, Sandra Kay Evaro. She is survived by her sister, June Jezierski of Kelvedon, England; 3 children, Michael Koppert, Deborah Paxton (Michael), Sheila Ove (Robert); 7 grandchildren, Dana Evaro, Caitlin Paxton, Madison Paxton (Jenna Buhr), Rebecca Ove (Dennis Tolan), Angela Ove, Gina Ove (Jerry Thompson) and Ashley Ove (Mark Morrow); and 9 great-grandchildren Kayla Hartman, Ava Evaro, Michael Tolan, Bailee Tolan, Brayden Tolan, Lucas Ove, Marley Morrow, Riley Paxton and Grady Thompson. A memorial service will be held at 11:00A.M. Monday, January 26, 2015, at the First Lutheran Church in West Okoboji. The Schuchert-Lentz Funeral Home is in charge of the arrangements.

Betty Roy, age 86, passed peacefully, surrounded by her family, on January 21, 2015, at Hilltop Care Center in Spirit Lake. Betty was born on February 2, 1928, to her parents Alfred and Edith Ponder in Little Wigbourough, England. She spent... View Obituary & Service Information

The family of Betty Roy created this Life Tributes page to make it easy to share your memories.

Send flowers to the Roy family.