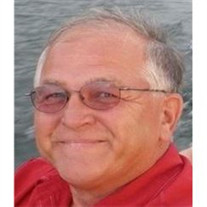 William ("Bill") Dean Eich died peacefully in his home in Spirit Lake, Iowa, on Friday, October 2, 2015. A memorial visitation will be held on Monday, October 5, 2015, from 5:00 pm to 8:00 pm, with a Vigil service for the Deceased at 7:00 pm at St. Mary's Catholic Church. A funeral Mass will be held at St. Mary's Catholic Church in Spirit Lake, IA, at 10:30 am on Tuesday, October 6, 2015. The Schuchert-Lentz Funeral Home is in charge of the arrangements. Bill was born on January 7, 1950, in Sheldon, IA, the son of Adam and Lucille (Penning) Eich. His family moved to California in 1956, where they lived near Los Angeles until returning to Iowa in 1965, making their home in Spirit Lake. Bill attended Spirit Lake High School where he played football and baseball, wrestled, and ran track. Bill broke several SLHS track records (100, 220, 440, 880, 440 relay, 880 relay, mile relay, the sprint medley relay, and the distance medley relay). In 1968, Bill and his SLHS teammates won the IHSAA Class A state track meet under the coaching of Bob Wells, Bill's mentor and lifelong friend. At the meet, Bill won the 220 yard dash and the 880 relay and took 4th in the mile relay. Bill earned a bachelor's degree in Construction Engineering at Iowa State where he ran track his freshman year and met the love of his life, Mary Jean ("Jeani") Ronnebaum. Bill and Jeani were married in Independence, IA, on June 3, 1972. They lived in Omaha, Nebraska, and Memphis, Tennessee, before settling in Spirit Lake in 1974, and becoming members of St. Mary's Catholic Church. After working as a contractor at Eich and Son with his father, Adam, Bill founded Bill Eich Construction Company in 1974, through which Bill designed, built, and remodeled hundreds of homes and business in and around the Iowa Great Lakes over 40 years. His designs won prestigious awards including the NAHB Energy Value Housing Award, Remodeler Magazine's Big 50, and Popular Science's "Best of What's New." Bill was one of the first builders in the U.S. to design and promote the use of frost-protected shallow foundations for residential construction. Bill previously served as President of the Homebuilders Association of Northwest Iowa and as President of The Energy Efficient Builders Association. He also volunteered his homebuilding expertise at Habitat for Humanity. Bill loved living and boating on West Lake Okoboji, and he entertained family and friends at the lakes over the years. Bill was actively involved in the University of Okoboji Winter Games since its inception and hosted "Spas on Ice" alongside the Polar Plunge for 11 years. Bill also enjoyed traveling the world with his wife, Jeani, and making new friends everywhere he went. Bill spent his last weeks singing, sharing stories, and celebrating life with hundreds of friends and family members who demonstrated what "It's an Okoboji Thing" truly means. Bill is survived by his wife, Jeani; his three daughters and sons-in-law, Kerri and Eric Reiners, Jill and Michael Margetts, and Lori Eich and Jeremy Lueck; five grandchildren, Tyler, Elijah, and Ashley Margetts and Boden and Ayden Reiners; and three sisters, Linda (Robert) Hinshaw, Yvonne (Harvey) Veldman, and Kristi Larson. In lieu of flowers, memorial gifts may be made to the Okoboji Backpack Program, Attn. Teresa Goehring, 705 N Ave., Milford, IA 51351 or the Spirit Lake Backpack Program, Attn. Lori Thompson, 2701 Hill Ave., Spirit Lake, IA 51360.

The family of Bill Eich created this Life Tributes page to make it easy to share your memories.

Send flowers to the Eich family.