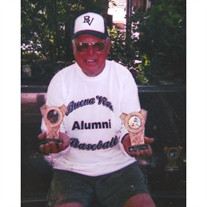 Bill J. Ferns, age 81, of Spirit Lake, passed away Wednesday, June 25, 2014, at Avera-McKennan Hospital in Sioux Falls, South Dakota. He was born on August 15, 1932, in Sioux City, Iowa, to Will and Florence (Goodman) Ferns. Bill graduated from Anthon High School in 1950, and Buena Vista University with a B.A. Degree in 1954, while lettering in football and baseball. On August 18, 1954, Bill was inducted into the Army, where he was stationed in Germany and playing football for the 9th Division. Bill spent 33 years as a teacher, coach and administrator in Iowa and Minnesota, before retiring in 1990. In 2006, he received a Distinguished Athletic Award and was inducted into the Buena Vista University Hall of Fame. Bill was a member of the American Legion in Milford, Calvary United Methodist Church in Arnolds Park, where he was very active in church activities, the Masonic Lodge and the Shriners. He enjoyed spending his spare time fishing, hunting, and having coffee with his friends. Bill was always willing to help in any manner he could! Bill is survived by two sons, Chris Ferns of Orlando, Florida, and Doug Ferns, and his wife, Tammy of Sartell, Minnesota; sister, Virginia Harder of Centennial, Colorado; two grandchildren, Brandon and Bria Ferns of Sartell, Minnesota; nephews, Kent Harder of Littleton, Colorado, and Brad Harder, and his wife, Kathy of Centennial, Colorado; nieces, Maribeth Pethoud, and her husband, Gary of Littleton, Colorado, Jo Lynn Bender, and her husband, Rev. Harold of West Alms, Wisconsin, and Kerri Walenta, and her husband, Jeff of Olney, Maryland; and brother-in-law, Al Draegert of Centennial, Colorado. He was preceded in death by his parents; sister, LaVonne Draegert; and nephew, Pat Harder. A funeral service will be held at 10:00A.M. Monday, June 30, 2014, at Calvary United Methodist Church in Arnolds Park. Visitation will be held Sunday, from 5:00P.M. until 7:00P.M. at the Schuchert Funeral Home. Burial will be at Oak Hill Cemetery in Anthon, Iowa. Memorials may be given in Bill's name to Calvary United Methodist Church, P.O. Box 280, Arnolds Park, Iowa, 51331. The Schuchert Funeral Home is in charge of the arrangements.

The family of Bill Ferns created this Life Tributes page to make it easy to share your memories.

Send flowers to the Ferns family.