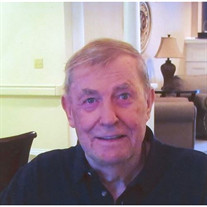 William "Bill" Hoffmeyer, age 80, of Milford, IA, formerly of Petersburg, MN, passed away Friday, January 9, 2015 at the Milford Care Center, Milford, IA. Bill was born at the farm home near Huntington, IA on August 9, 1934, to Floyd and Harriet, also known as "Holly," (Stam) Hoffmeyer. Bill graduated from Jackson High School, Jackson, MN, in 1952. He immediately enlisted and served his country in the Air Force for twelve years. While stationed in Shreveport, LA, he met and eventually married Era Nelwyn Plunkett on May 13, 1955. Bill earned his Masters Degree in Academic Instruction from the University of Colorado in 1960. He worked for Northwestern Bell for the next 25 years, most of those years as an instructor, before retiring in 1990. While in the Air Force, he developed a love for flying. He continued with his pilot education and earned his commercial pilot's certification. He continued to fly for recreation throughout his life. Bill and Era enjoyed travel, both in the U.S and abroad, and were able to do so extensively. For many years they owned a vacation home at Lake Mille Lacs, MN which gave him the opportunity to indulge in his other loves of hunting, fishing, boating and photography. When he moved back to Petersburg, he volunteered with the Jackson County Sheriff's Reserve and the Lions Club. Bill is survived by two sisters: Sandra Mixell of Fulda, MN; Joy Zweibahmer and her husband, Chuck, of Milford; sister-in-law, Barbara (Lonnie) Hoffmeyer of Estherville, IA and many nieces, nephews and cousins. He was preceded in death by his wife, Era, who passed away on May 11, 2013; his parents; a brother and sister-in-law, Merritt and Evelyn (Evie) Hoffmeyer, Sherburn, MN; and a brother, Lonnie Hoffmeyer, Estherville. A memorial service for family and friends will be held at 10:30 A.M. Saturday, March 7, 2015, at the Spirit Life Fellowship Church in Spirit Lake. The Schuchert-Lentz Funeral Home, Spirit Lake, IA, is in charge of the arrangements.

The family of Bill Hoffmeyer created this Life Tributes page to make it easy to share your memories.

Send flowers to the Hoffmeyer family.