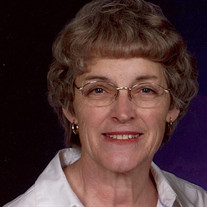 Bonnie Pelzer passed away January 17, 2022, at the age of 88. Bonnie was the fifth child of the late Frank and Ella Krueger. She was born May 5, 1933, in a farmhouse near Walnut, Iowa. She attended a one room country school for her first eight years, graduating from Atlantic High School in 1953. She enrolled in the Omaha School of Business and upon graduating she worked in Omaha, Nebraska for Brandies. In 1950, Bonnie and Max Pelzer met at the roller-skating rink and started to date. The Korean War came along, and they decided to wait to marry until Max got out of the Navy. She continued to work in Omaha and wrote Max at least twice a week for four years. Bonnie and Max were married July 10, 1955. They moved to Iowa City, Iowa in September 1955, so Max could attend the University of Iowa Law School. While in Iowa City, she worked at the University of Iowa Hospital as a CNA and Fuller Brush Company. After the birth of their first child Mark, she ran a day care center in her home. During this time Sherry was born. In the fall of 1960, the family moved to Estherville, Iowa where Scott was born and followed by the birth of their son, Todd. Besides taking care of four children and all of the household duties she was an active member of the United Methodist Church, United Methodist Women, Bazaar, funeral dinners, and taught Sunday School. Bonnie was a Cub Scout leader, member of the County Line Club and P.E.O in Estherville. Bonnie believed that a good education was important and attended the children’s school activities and sporting events. Bonnie and Max took many family trips and visited six continents and 54 different countries. Bonnie fought Parkinson’s disease for over 20 years. During this time, she never complained even though she knew that there is no cure. Bonnie is survived by her husband of 66 years, Max of Spirit Lake, Iowa; son Mark Pelzer [Noriko] of Marshfield, Wisconsin; Sherry Fuhrman [Tom] of Spirit Lake; Scott Pelzer [Karen] of Denver, Colorado; Todd [Kristine] of Wake Forest, North Carolina; eight grandchildren, Julie, Christopher, Megan, Christie, Mindy, Zachary, Evelyn and Ella; four great- grandchildren; sister, Ruth Pelzer of Ruthven, Iowa; and sister-in-law Kay Krueger of Holstein, Iowa. Bonnie is also survived by many nieces and nephews. Bonnie was proceeded in death by her parents, brothers, Alvin, Melvin, Robert and Frankie, and brothers-in-law and sisters-in-law. A family graveside service was held at East Side Cemetery in Estherville and a memorial service will be held at a later date. Max and his family would like to give a heartfelt thank you and gratitude to all of those that provided wonderful care and compassion to Bonnie.

Bonnie Pelzer passed away January 17, 2022, at the age of 88. Bonnie was the fifth child of the late Frank and Ella Krueger. She was born May 5, 1933, in a farmhouse near Walnut, Iowa. She attended a one room country school for her first eight... View Obituary & Service Information

The family of Bonnie Mae Pelzer created this Life Tributes page to make it easy to share your memories.

Send flowers to the Pelzer family.