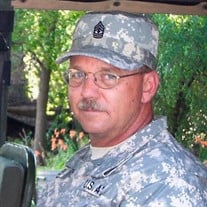 Brad McQueen, 55, of West Okoboji passed away on Thursday, August 2, 2018 at his home surrounded by his family. Funeral services for Brad will be 3:00 PM on Wednesday August 8th at the First Lutheran Church in West Okoboji. Military Rites will be conducted by the Iowa Army National Guard Honor Guard. A Celebration of Brad's life will be held at 5:00 PM on Wednesday at the Boat House at Parks Marina. Visitation will be 5-8 PM Tuesday at First Lutheran Church. Per Brads wishes, cremation will take place after the funeral service. Bradley John McQueen, the son of Don and Carol (Hynes) McQueen, was born on August 9, 1962 in Sioux City, Iowa. He graduated from Spencer High School and later attended Iowa Lakes Community College, studying Aviation. Brad served in the Iowa Army National Guard for 27 years, retiring as a First Sargent in 2009. On September 5, 1986 Brad was united in marriage with Linda Taylor in Spencer, Iowa. Brad had worked at Pixler Electric, Stylecraft, he then owned and operated The Personal Touch cleaning business with his wife, Linda. After that he worked for Pepsi and most recently Brad worked as a riger for Parks Marina. He was a member of First Lutheran Church, and was a volunteer firefighter and EMT for 14 years in Milford. Brad enjoyed hunting, fishing, boating and pursuing his dream of flying. Left to cherish Brad’s memory is his wife of 31 years, Linda; a son, Brandon McQueen of Okoboji; a daughter, Amber Thomas and her husband Adam of Lake Mills; two grandchildren, Leighla and Emmett Thomas; mother, Carol McQueen of Spencer; and a sister, Lyn Boriske of College Station, TX. He was preceded in death by his father, Don McQueen. Memorials may be made in Brad’s name to the Sioux Falls VA Oncology Department, 2501 W. 22nd Street, Sioux Falls, SD 57105.

Brad McQueen, 55, of West Okoboji passed away on Thursday, August 2, 2018 at his home surrounded by his family. Funeral services for Brad will be 3:00 PM on Wednesday August 8th at the First Lutheran Church in West Okoboji. Military Rites... View Obituary & Service Information

The family of Brad McQueen created this Life Tributes page to make it easy to share your memories.

Brad McQueen, 55, of West Okoboji passed away on Thursday, August...

Send flowers to the McQueen family.