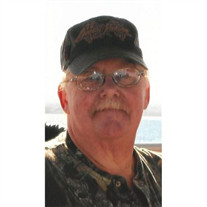 Bradley Richter, age 60, of Spirit Lake, passed away Thursday, April 4, 2013, at Hilltop Care Center in Spirit Lake with his family by his side. He was born on October 14, 1952, in Hartley, Iowa, to Luvern and June (Proehl) Richter. Brad graduated from Sioux Valley/Peterson Linn Grove High School in 1970. He was united in marriage to Shirley Schreiber on April 30, 1983, in Spirit Lake. Brad worked for McQuay's and Crystal Tips for many years before going to work for Polaris in the last several years. He enjoyed spending his spare time hunting, fishing, camping, reading, golfing and woodworking. Brad was a member of Immanuel Lutheran Church, Pheasants Forever and Northwest Turkey Federation. Brad was an avid outdoorsman - he hunted pheasants, deer and turkey as well as several fishing trips including Canada. Brad followed sports, his favorite football team was The Green Bay Packers. One of his favorites pastimes was campfires with his family & friends which included singing "Hello Dolly". Brad had a caring heart and was always helping others, his true love was spending time with his family and friends! Left to cherish Brad's memory are his wife, Shirley Richter of Spirit Lake; two sons, Travis Richter and Molly Dahlberg of Baton Rouge, Louisiana, and Heath Richter, and his wife, Connie of Lake Park; two sisters, Carol Hill, and her husband, Jim of Coarsegold, California, and Sandi Gunnerson, and her husband, Terry of Peterson; brother, Gordy Richter, and his wife, Lori of Sutherland; and four grandchildren, Mckenna, Jaxon, Zackary and Xavier. He was preceded in death by his parents; infant son, Brandon; and a niece, Sheila Pickering. A funeral service will be held at 10:30A.M. Monday, April 8, 2013, at Immanuel Lutheran Church in Spirit Lake. Visitation will be held Sunday, from 4:00P.M. until 6:00P.M. at the Schuchert Funeral Home. Burial will be at Lakeview Gardens Cemetery. The Schuchert Funeral Home is in charge of the arrangements.

Bradley Richter, age 60, of Spirit Lake, passed away Thursday, April 4, 2013, at Hilltop Care Center in Spirit Lake with his family by his side. He was born on October 14, 1952, in Hartley, Iowa, to Luvern and June (Proehl) Richter. Brad graduated... View Obituary & Service Information

The family of Brad Richter created this Life Tributes page to make it easy to share your memories.

Send flowers to the Richter family.