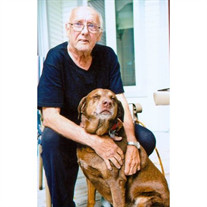 Butch A. Moritz, age 67, of Spirit Lake, passed away Friday, June 22, 2012, at Lakes Regional Healthcare in Spirit Lake. He was born on March 8, 1945, in Spirit Lake, Iowa, to Arthur and Marie (Johnson) Moritz. Butch graduated from Spirit Lake High School in 1963. He has worked in the concrete business all of his adult life, before owning and operating Moritz Construction for many years. Butch was united in marriage to Frances Hagedorn on January 17, 1997, in Las Vegas, Nevada. When he was not working, Butch enjoyed collecting antique tractors and guns. He also loved going to garage sales and auctions. Butch is survived by his wife, Frances Moritz of Spirit Lake; two daughters, Tami Gerlach, and her husband, Jerry, of West Des Moines, and Tiffany Tiedemann, and her husband, Bruce, of Gothenburg, Nebraska; his step-children, Heidi Watkins of Spirit Lake, Perry Watkins, and his wife, Sue, of Lake Stevens, Washington, Robin Watkins of Spirit Lake, and Ray Watkins Jr., and his wife, Suzanne, of Black Diamond, Washington; grandchildren, Nick, Nathan, Benjamin, Samantha, Madison, Blaine, Brittany, Hailee, Chris, Megan, Whittney, Rachael, Ashley and Tyler; and a sister, Jeanie Miller of Costa Mesa, California. He was preceded in death by his parents; two sisters, Donna and Joyce; and a brother, Ivan. A funeral service will be held at 10:30A.M. Tuesday, June 26, 2012, at the United Methodist Church in Spirit Lake. Visitation will be held Monday, from 4:00P.M. until 7:00P.M. at the Schuchert Funeral Home. Burial will be at Lakeview Cemetery. In lieu of flowers, memorials may be given in Butch's name to the Humane Society. Butch requested casual attire only at the visitation and funeral. The Schuchert Funeral Home is in charge of the arrangements.

The family of Butch Moritz created this Life Tributes page to make it easy to share your memories.

Send flowers to the Moritz family.