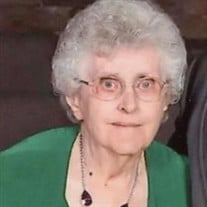 Carol Marie Kirschbaum, 90, of Spirit Lake passed away on Saturday, August 29, 2020 at Lakes Regional Healthcare in Spirit Lake. A mass of Christian Burial will be held at 10:00 a.m. with a visitation starting at 9:00 a.m. on Saturday, September 12, 2020 with a Rosary recited at 8:45 a.m. by the Catholic Daughters, Lady of the Lakes Chapter #211 of St. Mary’s Parish at St. Mary’s Catholic Church in Spirit Lake. Burial will take place in the St. Margaret’s Cemetery in Spirit Lake. Carol was born on December 19, 1929 the only child of Albert and Catherine (McGarry) Kamp at St. Joe’s Hospital in Dundee, IL. Her doctor proclaimed her a “Miracle Baby”. She attended St. Lawrence Catholic School and graduated from St. Edmunds High School in 1947 where she received the “Bishop’s Award” for 4 years of choir. After graduation she worked as a cashier at LaSalle College in Chicago, IL. She enjoyed many trips around the country and Canada with her girlfriend Jean, who introduced her to her future husband, Robert Sr., on a blind date. Robert and Carol were married at St. Lawrence Church on January 15, 1955. After their marriage, they moved to Cedar Rapids, IA. On August 7, 1956, their only child Robert Jr. was born. In July of 1965 they moved to Spirit Lake, IA and opened Bob’s Watch Repair that they owned for 41 years before retiring. She was a founding daughter of The Catholic Daughters of Our Lady of the Lakes #211 and was very proud of it. She was a proud lifelong member of the VFW Auxiliary and the American Legion. She always looked forward to yearly Kirschbaum family trips to Jackpot Junction. Yes, she loved her slot machines! Carol’s passion was her family and always looked forward to visits from her grandchildren and great grandchildren. She had a great love for animals, especially dogs and cats. Her faith and devotion to the Blessed Mother and the love of her family is what kept her going for 90 years. Left to cherish her memory, son Robert Jr. wife Kimberly, grandson, Jason and Kasey and their children Russel (Her Man), Kimberlyn and Major; grandson, Joshua and Carissa and their children Nicole and Liam; granddaughter, Jennifer and Marshall Ellis, granddaughter, Amber and Andrew Scates and their daughter Naomi; cousin Mildred Kamp, brother in law and sister in law Don and Kay, Bob Erickson and family; numerous nieces, nephews and her cat Cindy Lou. She was preceded in death by her husband, parents, grandparents, aunts, cousins, brothers and sisters in law and her friend Glee Eddy. Bob Jr. was by his mothers side on the morning she passed away and told her in the early hours on Saturday morning, “In August you gave birth to me and 64 years later in August you became a Guardian Angel for your family.”

Carol Marie Kirschbaum, 90, of Spirit Lake passed away on Saturday, August 29, 2020 at Lakes Regional Healthcare in Spirit Lake. A mass of Christian Burial will be held at 10:00 a.m. with a visitation starting at 9:00 a.m. on Saturday, September... View Obituary & Service Information

The family of Carol Marie Kirschbaum created this Life Tributes page to make it easy to share your memories.

Carol Marie Kirschbaum, 90, of Spirit Lake passed away on Saturday,...

Send flowers to the Kirschbaum family.