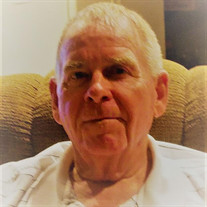 Charles Leroy Thoreson, 80, of Bradenton, FL, formerly of Spencer and Spirit Lake passed away on Friday April 27, 2018 in Spirit Lake surrounded by his family. Chuck, the son of Carl and Velma Thoreson, was born April 6, 1938 in Spencer. It was there he received his education. After graduating from Spencer High School in 1956, he worked on Construction before entering the Marine Corp where he served his country for 4 years, obtained the rank of Sargaent and was honorably discharged. Upon returning home Chuck was a Spencer Policeman for four years. He married "Kay" Karen Rae Carlson on June 15, 1963, in Spirit Lake. They made their home in Spencer. They were members of Grace United Methodist Church in Spencer. On February 13, 1965, Chuck became an employee of United Parcel Service, starting out as a driver for 18 years before becoming a Supervisor. In 1995 after 32 years of service with UPS Chuck retired. In 1995 they moved to Okoboji and divided their time between Bradenton, FL, Okoboji and Spirit Lake. At that time they transferred their church membership to the Spirit Lake Methodist Church. Chuck loved his church , treasured his time with his family and friends, enjoyed boating, fishing and bowling. He is survived by his wife, Kay Thoreson of Bradenton, FL., son Troy Thoreson of Spencer, daughter, Cheri Petersen and her husband Mark of Spirit Lake, three grandchildren, Austin Thoreson, Montana Thoreson and Nichole Hollowell and her husband Jeremy of Spirit Lake, three great grandchildren, Jayden, Dillen and Hayli. two sisters, Carol Thoreson and Judy Ensley of Spencer, two brother in laws. Gary Carlson and his wife Martha of Spirit Lake and John Carlson and his wife Jo of Tucson, AZ, along with many friends and relatives. He was preceded in death by his parents, Velma and Carl Thoreson.

Charles Leroy Thoreson, 80, of Bradenton, FL, formerly of Spencer and Spirit Lake passed away on Friday April 27, 2018 in Spirit Lake surrounded by his family. Chuck, the son of Carl and Velma Thoreson, was born April 6, 1938 in Spencer.... View Obituary & Service Information

The family of Charles "Chuck" Leroy Thoreson created this Life Tributes page to make it easy to share your memories.

Send flowers to the Thoreson family.