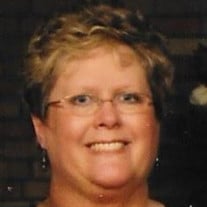 These words were written by Cheryll in 2014, with a few additions from her children: Cheryll Ann (Stover) Neppl, 64, died on July 3, 2021. She was the only daughter of Eugene (Smokey) and Audrey Stover. Cheryll was born in Corona, CA on August 3, 1956, which was Audrey's 24th birthday. Due to her father's long career in the United States Marine Corp, she was fortunate to have lived in several locations resulting in attending 8 different schools, ending with graduation in 1974 from Arnolds Park High School. Cheryll had an older brother, Glenn. Their relationship was a typical older brother with a younger sister rivalry. Cheryll married Richard (Dick) Neppl on October 24, 1980. Although their marriage only lasted 20 years, they maintained a unique friendship as well as her close relationship with most of the Neppl family. Their marriage was blessed by the births of their two children. Stacey Lee Neppl was born March 1, 1982 in Spirit Lake, IA. Gregory (Greg) Eugene Neppl was also born in Spirit Lake, IA on July 19, 1986. It was important to Cheryll to have her children stay in the same school district their entire scholastic life as well have grandparents living nearby. Cheryll considered her children as her life's greatest achievement. During her adult years she had a variety of different jobs, including bartender, short order cook, several different retail positions, restaurant server, and hotel maid. Cheryll was a natural caregiver. In her late 20’s, she attended and graduated from nursing school, and in her 30s, she started an in-home daycare so that she could be at home with her young growing children, as well as care for the children of friends and family. Later, Cheryll went to work as the Office Manager at Waste Management's Dickinson Landfill for 17 years. She retired November 2010. Cheryll was diagnosed with breast cancer in August 2007 which she fought and won by surgery, chemo, and radiation. Shortly after finishing cancer treatment, she noticed some neurological deficiencies. After several trips to the specialist and innumerable tests while playing the waiting game, the official diagnosis of ALS (amyotrophic lateral sclerosis), also known as Lou Gehrig’s Disease was given in August 2009. Due to this devastating news she felt that it was time to sell her home and move to Minneapolis, MN to be closer to Stacey and necessary medical treatments. Cheryll always put family first. Following her diagnosis, she was dedicated to making lasting memories with her loved ones. From incredible trips to Hawaii, Washington DC, and a Caribbean Cruise, to taking in many concerts, and theatrical productions, Cheryll was determined to make the most out of each and every day. She fought long and hard and always managed to stay positive. She and her family enjoyed advocating for those affected by ALS, and hosted several fundraising events. In lieu of flowers, please consider donating to the ALS Association in Cheryll’s memory. Cheryll leaves the following family members: Stacey and Nick Reuland, Crystal, MN; Greg and Amanda (Patzer) Neppl, Mitchell, SD; Glenn and Marie (Hoffman) Stover, Greenville, IA and their son, Smokey Joe. Those preceding her in death are both her parents: Eugene (Smokey) Stover, May 2010 and Audrey Stover, February 2012. A memorial service will be held at 7:00 p.m. Friday, July 9, 2021, at the Schuchert-Lentz Funeral Home in Spirit Lake. A visitation will be held 2 hours prior to the service at the funeral home.

These words were written by Cheryll in 2014, with a few additions from her children: Cheryll Ann (Stover) Neppl, 64, died on July 3, 2021. She was the only daughter of Eugene (Smokey) and Audrey Stover. Cheryll was born in Corona, CA on August... View Obituary & Service Information

The family of Cheryll Ann Neppl created this Life Tributes page to make it easy to share your memories.

These words were written by Cheryll in 2014, with a few additions...

Send flowers to the Neppl family.