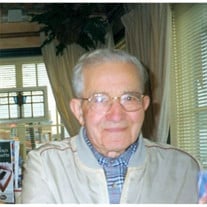 Chester Phillips was born the second of 11 children to George A. and Elsie J. (Maloney) Phillips on March 27, 1912, in rural Green County Iowa. He attended school in Scranton, IA, until the family moved to a farm west of Spirit Lake. He graduated high school from Spirit Lake in 1932. After graduating, he started working for farmers in the area for $25.00 a month. Then, in 1937, Chet started farming for himself with four horses, three cows, 50 chickens, and some old machinery. On the 20th day of April 1938, he married Mary Lambert. Mary's brothers introduced them. They lived west of Spirit Lake on a farm until 1943. They then moved to a farm east of Spirit Lake that Mary's family had homesteaded years before. To this union two children, Jim and Betty, were brought into this world. Chet was a grain and livestock farmer. After semi-retirement he continued to help his son, son-in-law and grandson farm. Chet loved farming and livestock; they were his hobbies. He was chairman of the one room school until they consolidated with Spirit Lake School Systems. He was also on the Dickinson County Extension Service Board for and served as a 4-H leader for many years. He was devoted to the church as well and served on many committees and the trustees for a great deal of years to help see the new church that stands today. When they semi retired and moved into town in 1983, he had a very large garden and gave a lot of the fresh garden products to family, friends, and neighbors. In his last few years before moving to Hilltop Care Center, he attended the Senior Kiwanis. Those allowed to enjoy their memories of Chet include: his wife, Mary; his daughter, Betty Wernimont; his sister, Ruth and her husband, Ron Hansen of Estherville; his brother-in-law, Donald Barfoot of Spirit Lake; E.W. Harris of Spartanburg, South Carolina; as well as his sister-in-law, Phoebe (Phillips) Clayton and her husband, Louis. Chet's grandchildren include: Robin and her husband, Greg Elser of Spirit Lake; Mel and his wife, Sonya Wernimont of Spirit Lake; Scott and his wife, Jessica Wernimont of Cottonwood, MN; along with Amy and her husband, J Dodson of Nevada, IA. Chet also had eleven great-grandchildren: Jacob, Rachel, and Coral Elser of Spirit Lake; Cody and Mindy Wernimont of Spirit Lake; Dalten, Shelten, and Payten Wernimont of Cottonwood, MN; Joseph, Gracie, and Lucy Dodson of Nevada, IA. He also had many nieces and nephews as well. He was proceeded in death by his parents; his son, James Phillips and son-in-law, Mendal Wernimont; also by his brothers, Clifford and his wife, Melvina; Donald and his wife, Lola; Robert and his wife, Margaret; along with Fred (at birth); Lyle; George and his wife, Sophia. Chet was also proceeded by his sisters: Freda, Doris Barfoot, Dorothy Harris; as well as nephews: David Hansen, Melvin Phillips, and Adam Phillips. A funeral service will be held at 10:30A.M. Monday, January 14, 2013, at the United Methodist Church in Spirit Lake. Visitation will be held Sunday, from 4:00P.M. until 6:00P.M. at the Schuchert Funeral Home. Burial will be at Lakeview Cemetery in Spirit Lake.

Chester Phillips was born the second of 11 children to George A. and Elsie J. (Maloney) Phillips on March 27, 1912, in rural Green County Iowa. He attended school in Scranton, IA, until the family moved to a farm west of Spirit Lake. He graduated... View Obituary & Service Information

The family of Chet Phillips created this Life Tributes page to make it easy to share your memories.

Chester Phillips was born the second of 11 children to George...

Send flowers to the Phillips family.