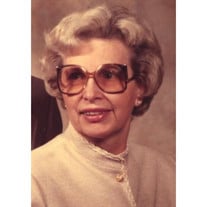 Clara Louise Hagedon Kimmel (Clare) was born March 25, 1925, in Rock Rapids, Iowa, daughter of Albert and Anna (Johnson) Hagedon. She grew up and attended school in Rock Rapids, graduating from Rock Rapids High School in 1943. Clare was employed as a dental assistant in the office of Dr. G.M. Fish for five years. On October 24, 1948, she was united in marriage to Richard Lee Kimmel at the Methodist Church in Rock Rapids. She and her husband lived for many years on the Kimmel family farm near Sheldon, Iowa. They became the parents of two daughters, Carla and Debra. Growing up, Clare was a member of the Methodist Church in Rock Rapids. After her marriage, she joined the Church of the Brethren in Sheldon, where she was a deaconist, Bible and Sunday School teacher, and active in the Ladies Aid. More recently, she became a member of the Methodist Church in Spirit Lake, Iowa. Clare attended Iowa Lakes Community College with emphasis in the health care field. After their move to the Lakes area in 1977, she worked as a volunteer in the nursing home and care center. Previously, she had worked as a Sioux County field assessor for several years. She also worked as an insurance secretary, filing health insurance claims for her husband's companies. Clare's interest was collecting Shirley Temple porcelain dolls, dressed in their authentic costumes that were portrayed in the movies. She also had Shirley Temple plates and mugs, which she displayed in her home. Clare especially enjoyed her family and grandchildren, in addition to helping friends and neighbors. She was a great cook, and many have fond memories of being welcomed and entertained in the Kimmel home. Clare leaves to cherish her memory her husband Richard (Dick) of Arnolds Park, and her two daughters, Carla and her husband Brent Anderson of Newport Beach, California, and Deb and her husband Mark Bertsch of Mason City, Iowa, and also, three grandchildren - Carrie of Runnells, Iowa, Matthew of Des Moines, Iowa, and Joshua of Newport Beach, California. She was blessed with one great-granddaughter, Addison Clare who was named in her honor. Preceding her in death were her parents, four brothers -- Albert, Alfred, and Ralph Hagedon of Rock Rapids, Iowa, and Duane Hagedon of Sioux City, Iowa, three sisters -- Katherine (Kay) Abbott of Sioux City, Iowa, and Marjorie and Annabelle Kahl of Rock Rapids, Iowa, as well as twin sisters who died in infancy, and her lifetime friend Joyce Blinsom Thiesse of Springdale, Arkansas. A private funeral service for 90 year old Clara "Clare" Kimmel of Arnolds Park, will be held Tuesday, March 8, 2016, at the Schuchert-Lentz Funeral Home in Spirit Lake. Visitation for family and friends will be held Monday, March 7, 2016, from 5:00 P.M. until 7:00 P.M. at the Schuchert-Lentz Funeral Home. Burial will be at East Lawn Cemetery in Sheldon. The Schuchert-Lentz Funeral Home is in charge of the arrangements.

The family of Clara "Clare" Kimmel created this Life Tributes page to make it easy to share your memories.

Send flowers to the Kimmel family.