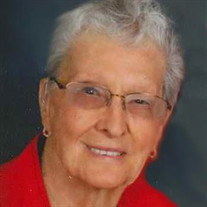 Cleona Veronica Schmidt, 97, of Spencer, IA passed away on Saturday, September 24, 2016 at the St. Luke Nursing Home in Spencer, IA. A memorial mass will be held at 10:30 a.m. Saturday, October 1, 2016 at St. Joseph Catholic Church in Milford, IA with Fr. Tom Flanagan officiating. Visitation will be one hour prior to service time at the church. Burial of her cremains will take place at a later date in the North Lawn Cemetery in Spencer, Iowa. Arrangements are under the direction of Schuchert-Lentz Funeral Home. Cleona was born the daughter of Pearly and Abbie (Goyette) Morrow on August 1, 1919 in Royal, Iowa. She was born on the family farm near Royal. When she was 15 years old, she moved into the town of Royal with her parents. She attended country school in rural Royal and continued her education at the Royal High School in Royal. When she was 18 years old Cleona was united in marriage to George Hughes. A daughter Rita was born to that union. She was later married to Lawrence McHugh. A son Mike was born to that union. On February 9, 1954 she was united in marriage to Fred J. Schmidt, Sr. in Worthington, MN. Together they made their home Everly, IA. They were blessed with a son Fred Jr. Cleona enjoyed boating, fishing, reading, needlework, traveling, cooking and spending time with family and friends. She was member of the Catholic Daughters; she also cooked for the Okoboji Summer Theater, and was a member of the Ladies of The Spirit Lake VFW Post #4514 Auxiliary. Left to cherish her memory is her loving husband Fred Schmidt, Sr. of Spencer; 2 sons Mike (Nadine) McHugh of Hendricks, MN; Fred (Gina) Schmidt, Jr. of Milford, IA; grandchildren Adam (Meredith) Schmidt of Minneapolis, MN; Jayme Miller of Tulsa, OK; Katie Merrell of Tulsa, OK; Kristi (Nathan) Lane of Palm Beach, FL; Joshua McHugh of Denver, CO; Mary (Theresa) Mueller of San Francisco, CA; Laura Mueller of Denver, CO; Marty Mueller of Denver, CO; Tom Mueller and his wife of Greenville, NC; Rob Mueller of Denver, CO; several great grandchildren; brother-in-law Ron (Jean) Schmidt of Colorado; many nieces, nephews and friends. She was preceded in death by her parents, 3 sisters Ruby LeClair, Lorene “Gunnie” Brower, infant sister Beulah, 3 brothers Leo, Dale, Virgil and a daughter Rita Kling.

The family of Cleona Veronica Schmidt created this Life Tributes page to make it easy to share your memories.

Cleona Veronica Schmidt, 97, of Spencer, IA passed away on Saturday,...

Send flowers to the Schmidt family.