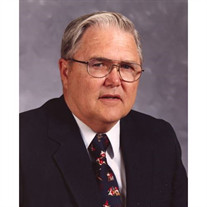 Clifford John Garvey (13 June 1941 ~ 10 June 2014) Spent his life serving God until his passing. A member of St. Boniface in Sioux City, IA and later St. Mary's in Spirit Lake, IA. Born to Emma (Hauswald) and John "Jack" Garvey and married Teresa Bibow contributing Jane (Aaron) Flammang, Jolene (Chris) Fitzpatrick , Joseph, Jonathan (Kristin), and James to society, which resulted in his grandchildren Nathan, Ella, Erin, Lana, Owen, and Maggie. He was raised alongside Patty Clinton, Teresa Mogensen, Thomas Garvey, and Linda Dorzok. He was a longtime teacher in the Sioux City Community School District, which enabled him to retire to Spirit Lake at a youthful 55 years old. Cliff was very involved in the planning of the Sioux City Relays for his role as a starter, he also spent time refereeing high school football, and assisted in the coaching of numerous sports. He was an elected member of the Spirit Lake Community School Board and a member of the Knights of Columbus. A creature of habit and a practical man that showed his love through actions and who was always ready to share his dry wit. Cliff was friends with all walks of life, which included his many coffee buddies at the Sioux City and Spirit Lake Hy-Vee's and his monthly pancake breakfast crew. High School Last Will and Testament "Being of sound mind, I hereby will my hidden talents to anyone who can find them." ~ Clifford Garvey ~ Cancer is terrible. Pray for a better way. ~ A funeral Mass will be held at 10:30A.M. Friday, June 13, 2014, at St. Mary's Catholic Church in Spirit Lake. Visitation will be held Thursday, from 3:00P.M. until 7:00P.M., with a Vigil for the Deceased at 6:00P.M. and a Rosary at 7:00P.M. at the Schuchert Funeral Home. Burial will be at St. Margaret's Cemetery. In lieu of flowers, memorials may be given in Cliff's name to St. Mary's Catholic Church.

The family of Cliff Garvey created this Life Tributes page to make it easy to share your memories.

Send flowers to the Garvey family.