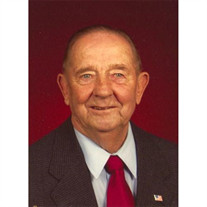 Clyde Gerth, age 92, of Spirit Lake died on Friday June 3, 2016 at the Hawkeye Care Center in Spirit Lake. Memorial services will be 11:00 AM on Tuesday June 7th at the First Presbyterian Church in Spirit Lake. Visitation will be from 5 - 7 PM on Monday at the Schuchert-Lentz Funeral Home in Spirit Lake. Clyde Edward Gerth was born on December 23, 1923 at Manson to Edward and Maude (Snow) Gerth. He attended Manson Public School and enlisted in the U.S. Navy when he was 18 years old. He served as an Airplane Mechanic and during the invasion of Okinawa he went in with the Marines. Clyde served from 1942 - 45. In 1948 he was united in marriage to Helen Nyren at the Lanyon Covenant Church and to this union were born 3 children, Roger, Robert and Jane. Clyde worked as a grain elevator manager at Robert's (Otho) and Lytton, he then was employed at Lange's Dairy in Sac City and later for AMPI in Lytton as a foreman of the milk drying department. When the plant closed in 1978 he transferred to the plant in Paynesville, MN for 8 years until his retirement. Clyde and Helen then returned to Spirit Lake to be near family and have lived there for 30 years. Clyde's greatest enjoyment was being with his grandchildren Abby and Nick Bierstedt, who they baby sat until school age and after school. Clyde also loved to garden and fish. Clyde was a kind, loving person and will be missed by family and friends. Survivors include his wife of 67 years, Helen; a son, Roger Gerth and his wife Jill of Estherville; a son-in-law, Rick Bierstedt of Spirit Lake; two grandchildren, Abby (Jake) Friedrichsen and Nick (Clarissa) Bierstedt; two step-granddaughters, Tessie Simon and Chelsea (Nathan) Hecht; two great granddaughters, Ava Jane and Lola Anne Friedrichsen; and a step great grandson, Keyan Simon. He was preceded in death by a son, Robert Gerth; a daughter, Jane Bierstedt; his parents; brothers, Walter, Don and Gene Gerth; a sister, Doris; in-laws, Carl and Mary Nyren; brother-in-law, John, Art, Eric and Morris Nyren; and two sister-in-laws, Alice and Mildred.

Clyde Gerth, age 92, of Spirit Lake died on Friday June 3, 2016 at the Hawkeye Care Center in Spirit Lake. Memorial services will be 11:00 AM on Tuesday June 7th at the First Presbyterian Church in Spirit Lake. Visitation will be from 5 - 7... View Obituary & Service Information

The family of Clyde Gerth created this Life Tributes page to make it easy to share your memories.

Send flowers to the Gerth family.