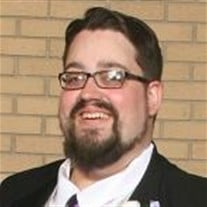 Cory Williamson (Kerr), 31, of Spirit Lake passed away unexpectedly on Friday, December 21, 2018 at Avera Heart Hospital in Sioux Falls, SD. A memorial service for Cory will be held at 2:00 p.m. on Wednesday, January 2, 2019 at Grace Lutheran Church in Spirit Lake. A time of fellowship and family gathering will be held immediately after the service at the church. Cory was born on October 26, 1987 in Emmetsburg, IA to Marlin and Ginger (Stowell) Williamson. He graduated from Hartley Melvin Sanborn High School in 2006. He was united in marriage to Kassie Thomas on July 16, 2016 in Spirit Lake. He was currently working at Casey’s Convenience Store in Milford. In his free time, Cory enjoyed reading comic books and collecting comic book memorabilia. He also enjoyed spending time with his family, going on adventures, and playing table top and video games with his wife and many friends. Cory wore his heart on his sleeve. He wasn’t happy until everyone around him was happy, and he went out of his way to make people smile. He brought joy to many people and his presence will be forever missed. Left to cherish his memory is his wife Kassie Williamson of Spirit Lake; father Marlin Williamson of Cherokee; mother Ginger Kerr of Spencer; siblings Meloni (James) Mengelsen of Spencer; Twin sister Kari (Allister) Sindt of Everly; Desirae Kerr of Madison, AL; Samantha (Matt) Cooper of Altoona; Jacqueline Fisher of Milan, IL; Travis Williamson of CA; Celina Williamson of CA; grandmother Janice Stowell of Ayrshire; aunts and uncles Lindy (Barney) Buren of Sanborn, IA; Gene (Val) Stowell of Crossville, TN; Rick (Peg) Stowell of Gilbert; Steve (Anna) Hughes of Alta; David Hughes of Longmont, CO; Chip (Brenda) Hughes of Cherokee; and many nieces, nephews, and cousins. He was preceded in death by his aunt Dawn Williamson; his grandparents Richard Hughes, Mary Potter, Harry Stowell, Claire Williamson, and Darlene Williamson; and by his close friend Jessie Brustares. As an expression of sympathy, in lieu of flowers, memorial contributions may be sent to Cory’s wife Kassie Williamson.

Cory Williamson (Kerr), 31, of Spirit Lake passed away unexpectedly on Friday, December 21, 2018 at Avera Heart Hospital in Sioux Falls, SD. A memorial service for Cory will be held at 2:00 p.m. on Wednesday, January 2, 2019 at Grace Lutheran... View Obituary & Service Information

The family of Cory Williamson (Kerr) created this Life Tributes page to make it easy to share your memories.