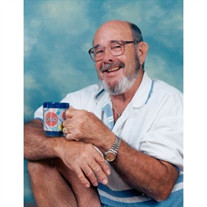 D.R. "Doc" Gumm, age 84, of Spirit Lake, passed away Sunday, October 14, 2012, at his home in Spirit Lake. He was born on June 15, 1928, in Bagley, Iowa, to Roy and Gladys (Murphy) Gumm. Doc graduated from Dow City High School. He was united in marriage to Betty West on August 3, 1947, in Ft. Dodge, Iowa. Doc worked for the Illinois Central Railroad for 37 years before retiring in 1981. After retiring, he worked for the Arnolds Park Amusement Park running the train and as a security guard at the Clay County Fair. Doc was always joking and laughing with his many friends, young and old. He enjoyed spending his winters in Ft. Myers Beach, Florida. He was a member of the Moose Lodge, the American Legion and the United Transportation Union. Doc is survived by his wife of 65 years, Betty Gumm of Spirit Lake; daughter, Debra Orness and her husband, Tim, of Ft. Dodge; three sons, Steven Gumm and his wife, Mary, of Pine, Colorado, Daniel Gumm and his wife, Georgia, of Ft. Dodge, and Thomas Gumm and Kaydee, of West Des Moines; 11 grandchildren; 12 great-grandchildren; niece, Kay Kofoed of Cedar Falls; and many nieces and nephews. He was preceded in death by his parents and four brothers, Kenneth, Gerald, Gary and Donald. A funeral service will be held at 2:00P.M. Thursday, October 18, 2012, at the United Methodist Church in Spirit Lake. There will be two hours of visitation prior to the service at the church. Burial will be at Lakeview Gardens Cemetery. The Schuchert Funeral Home is in charge of the arrangements.

The family of D.R. Doc Gumm created this Life Tributes page to make it easy to share your memories.

Send flowers to the Gumm family.