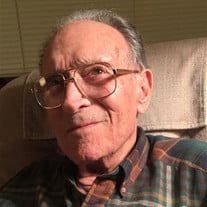 Dale Lewis Sturgeon, age 93, of Arnolds Park and Cherokee IA passed away April 10, 2019. Memorial service and interment will be held on a later date. Dale was born April 20, 1925 to Raymond and Hazel (Dyslin) Sturgeon on his grandparents’ (Lewis Henry and Mae Dyslin) farm near Aurelia, Ia. He attended 1st grade at Alta Consolidated School, graduated from 8th grade at Highview Consolidated School and was a four-sport athlete at Aurelia High School where he graduated in 1943. In 1944 during World War 2, Dale joined the Navy construction corps and was stationed in Fairbanks, AK to help build Ladd Air Force Field. He was later transferred to Honolulu HI and worked at the Pearl Harbor Naval ship-yards until the end of the war. On June 7, 1946, Dale was wed to Helen Marie Nash of Cherokee in Cherokee’s Memorial Presbyterian Church. Four children were born to this union: Sherry, Susan, Michael, and Connie. Dale was a painting contractor until 1956 when he and Helen opened Cherokee Bowl on the east side of Cherokee. They operated there until the flood of 1965, then erected the 16-lane Cherokee Bowl and Coachman Lounge. They operated there l977. The next years Dale sold life insurance and spent summers at their cottage on Twin Hills on East Lake Okoboji. Dale enjoyed water skiing and teaching his children and many friends how to ski, as well as riding motorcycles with Helen, and piloting his airplane. Dale and Helen spent five winters in Marathon FL in the Florida Keys, and the next eight winters in the Rio Grande Valley TX. In 1988, they purchased a permanent home on Emerald Hills Golf Course in Arnolds Park. Dale delivered Meals on Wheels as a volunteer for nine years, and also was a dog walker and trainer for nine years at the Humane Society to help prepare rescued dogs for adoption. Dale served on the Arnolds Park Planning & Zoning Committee until 2018. He and Helen enjoyed the Okoboji Summer Theatre, and were season ticket holders, occupying the same seats every Sunday night since 1990. He was a member of Calvary United Methodist Church in Arnolds Park. Dale was a 50+year member of the Masonic Speculative Lodge #307, Commandery, and Knights Templar, in Cherokee, and also a 50+ year member of the Abu-Bekr Shrine of Sioux City . He was a member of the Clown Unit and participated in the Shrine parades, dressed as a clown and riding his unicycle. Dale is survived by his wife, Helen, of Arnolds Park, and daughters, Sherry (Mark) Clark of Tulsa OK; Susan Williams of Fort Collins CO; Connie Sturgeon Holmer of Fort Collins CO; and son, Michael of Lakewood CO. Also, seven grandchildren; fourteen great-grandchildren and two great-great grandchildren. Also, one sister-in-law, Donna Sturgeon of Lancaster CA, and brothers-in-law, Bill Pigott of Cherokee, and Frank (Jeanne) Nash Jr of Berwyn IL, and many nieces and nephews. Dale was preceded in death by his parents and three brothers, Darrel, Roger and Arlo Sturgeon, and by his sister, Shirley Sturgeon Blair. A memorial service and interment will be at a later date. Condolences can be sent to Mrs. Dale (Helen) Sturgeon at Stonebridge Suites Assisted Living, 1401-H Avenue #104, Milford IA 51351.

Dale Lewis Sturgeon, age 93, of Arnolds Park and Cherokee IA passed away April 10, 2019. Memorial service and interment will be held on a later date. Dale was born April 20, 1925 to Raymond and Hazel (Dyslin) Sturgeon on his grandparents&#8217;... View Obituary & Service Information

The family of Dale L. Sturgeon created this Life Tributes page to make it easy to share your memories.

Send flowers to the Sturgeon family.