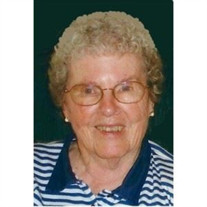 Memorial services for Darlene Menefee, 89, of Arnolds Park, formerly of Aurelia, will be 2:00 P.M. Monday, March 16, 2015, the First Congregational Church in Aurelia with Pastor Bruce Rapp officiating. Inurnment will be at a later date at the Pleasant Hill Cemetery, rural Aurelia. Visitation will be from 1:00 until 2:00 at the church. Darlene Faye Grienke was born on August 22, 1925, the daughter of Herbert and Christina (Gerjets) Grienke in Aurelia, Iowa. She attended school in Aurelia and graduated from the Aurelia High School in 1943. After graduating, she worked as a teller in the Farmer's National Bank. On September 12, 1945 Darlene married Clifford Lashley Menefee in Aurelia. After his service in WWII, they farmed north of Aurelia. Darlene worked for many years in the Farmer's National Bank and the First Trust & Savings Bank in Aurelia. She enjoyed her card clubs and the winters she and Clifford spent in Arizona, as well as the years on the lake in Arnolds Park. Nothing made her happier than fishing with her family. Time spent with her granddaughters and great-granddaughters was especially important to her along with the many card games they played. Darlene died Friday, March 13, 2015 at her home. Survivors include her son Steven Menefee of Bloomington, MN, daughter-in-law Joan Menefee of Boone, IA, two granddaughters; Carrie and her husband Erik Lundy of Des Moines, and Stephanie Menefee of Milwaukee, WI, and two great-granddaughters; Josie and Megan Lundy of Des Moines. Also surviving are two sisters; Myrna Huseman and Betty and her husband Jerry Anderson all of Aurelia, and many nieces, nephews, cousins, and friends. Preceding Darlene in death were her parents, her husband Clifford and son Craig in 2008.

Memorial services for Darlene Menefee, 89, of Arnolds Park, formerly of Aurelia, will be 2:00 P.M. Monday, March 16, 2015, the First Congregational Church in Aurelia with Pastor Bruce Rapp officiating. Inurnment will be at a later date at the... View Obituary & Service Information

The family of Darlene Menefee created this Life Tributes page to make it easy to share your memories.

Send flowers to the Menefee family.