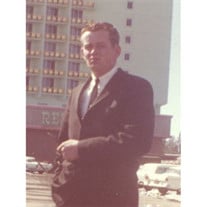 Darwin Lee Feldman was born on July 22, 1937, on the family farm near Lost Island Lake in Palo Alto County. His parents were Fred and Dorothy Feldman. Darwin spent over half his life living and working on that farm. He attended Lake Center School and the Ruthven United Methodist Church. Later in his life, Darwin moved to Spirit Lake with his parents and was employed by farm implement shops of Spencer and Estherville. He also worked for Cycle Country of Milford, and the Landfill. Darwin was a special needs person who would have been a different individual into today's society, if only he had had the chance of the professional education of today. But alas, our school system, at that date, had nothing to offer. His dream was to someday return to the farm. He never tired of driving out into the country side to check out fields and farms. Often times, he would stop and ask the farmer if he could have a jug full of well water as that water always tasted better to him. Darwin enjoyed putting difficult Native American puzzles together. These large puzzles covered most of his walls in his apartment. He enjoyed the history channel, and all the news worthy events of today's world. He dearly loved his family, and looked forward to the family dinners at his sister's home, especially her baked beans! Being included at the round table with the men in The Diner was a real favorite of his. He was a man of few words , but listened carefully to all that was said. Darwin spent his last three years at the Lakeside Lutheran Home in Emmetsburg, IA, where he was treated with greatest respect and kindness. He passed away there at the age of 77 on June 2, 2015. . He was preceded in death by his parents and a nephew, Brian Feldman. Left to mourn the loss of Darwin are: his brother, Wade Feldman, and two sisters, Carol (Floyd) Albers ; Karen (Cliff) Krieger, nieces: Kelly Albers, Kari Albers Fauber nephews: Todd Krieger, Cory Krieger, Richard Feldman and Dennis Feldman. Private family services for 77 year old Darwin Feldman of Spirit Lake will be held at Crown Hill Cemetery in Ruthven. The Schuchert-Lentz Funeral Home of Spirit Lake is serving the family.

Darwin Lee Feldman was born on July 22, 1937, on the family farm near Lost Island Lake in Palo Alto County. His parents were Fred and Dorothy Feldman. Darwin spent over half his life living and working on that farm. He attended Lake Center School... View Obituary & Service Information

The family of Darwin Feldman created this Life Tributes page to make it easy to share your memories.

Send flowers to the Feldman family.