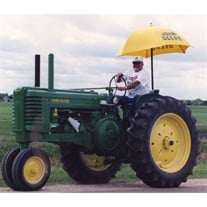 David Craig Gonnerman, the son of Donald and June (Hansen) Gonnerman, was born on November 5th, 1944 in Hartley, Iowa. He was baptized and confirmed at Trinity United Church of Christ in Hartley, Iowa. He lived his youth north of Hartley where his parents farmed and graduated from Hartley High School in 1963. David spent most of his adult life as a rural ag banker. He started his banking career in Lake Park, Iowa in 1968 and retired in 1995 as President at United Community Bank in Ocheyedan, Iowa. He continued his true passion which was farming, working the land with his John Deere tractors and equipment. Over the years he collected numerous John Deere tractors, equipment, toys, belt buckles, or anything else that had to do with John Deere! On Valentines Day in 2000, he was united in marriage to his best friend, Denise, at First Lutheran Church where he was an active member. He was also very active in the Northwest Iowa Two-Cylinder Club. He served many years as Secretary and was on the Board of Directors. This club has been a second family to David and Denise. David loved the outdoors and enjoyed his hobbies of hunting, fishing, snowmobiling, gardening, planting trees and going on tractor rides. Left to cherish his memory are his wife, Denise of Spirit Lake, IA; children: Craig (Darla) Gonnerman of Iowa Falls, IA, Shaun Gonnerman of Mason City, IA, Stuart Weston (Katie) of Des Moines, IA, Dan Weston of Olympia, Washington, Ashley Weston of Sioux Falls, South Dakota. Grandchildren: Kyle, Zach, Ivy, Keith, and Avery Gonnerman. Mother, June Gonnerman of Milford, mother-in-law, Joyce Scheu of Sibley, IA. Sisters: Karolyn (Tom) Erichsen of Spirit Lake, IA, Colleen (James) Johnson of Sutherland, IA. Brother: Loren Gonnerman of Panamal City, Florida and brother at heart, Kenny Gonnerman of Spencer, Iowa. Sister-in-law Desiree' (Kyle) Scheu of Janesville, Wisconsin, brother-in-law Tony (Beth) Scheu of Cody, Wyoming. Many aunts, uncles, nieces, nephews, relatives and a host of friends. He was preceded in death by his father, Donald Gonnerman; and his father-in-law, Larry Scheu. David passed away on Monday, April 29, 2013, at Lakes Regional Healthcare in Spirit Lake. A Celebration of David's Life will be held on Thursday, May 2, 2013, at 7:00P.M. at the First Lutheran Church. There will be visitation from 5:30P.M. until 7:00P.M. Thursday at the church. In lieu of flowers, memorials may be given in David's name. The Schuchert Funeral Home is in charge of the arrangements.

The family of David C. Gonnerman created this Life Tributes page to make it easy to share your memories.

Send flowers to the Gonnerman family.