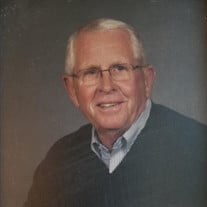 David F. Kollasch, 82, of Lexington, KY formerly of Spirit Lake passed away at his home in Lexington on Saturday, November 2, 2019. A Mass of Christian Burial will be held at 10:30 a.m. Monday, November 11, 2019 at St. Mary’s Catholic Church in Spirit Lake. Military Honors will follow the service on Monday at the church conducted by the American Legion Tempe Post #23 and John W. Kidd VFW Post #4514 both of Spirit Lake. Visitation will be held one hour prior to the service on Monday at the church. Burial will take place in the St. Michaels Catholic Cemetery in Whittemore, Monday afternoon following services in Spirit Lake, at approximately 2:30 p.m. David was born on January 28, 1937 in Whittemore, IA to Herman and Patricia (Weir) Kollasch. He graduated from Presentation Academy in Whittemore, Class of 1954. He served his country in the US Marine Corp from 1955 to 1958 in San Diego,CA and Cherry Point, NC. When he returned home, he was united in marriage to Betty L. Besch on February 13, 1961 at St. Michaels Catholic Church in Whittemore. She preceded him in death on July 30, 2000. David worked in Farming his entire life and also worked at the Coop Elevator in Whittemore. He graduated from Iowa Lakes Community College. He was an active Member of St Michaels Holy Name, Whittemore Golf Club, and Coached his Son, Nick's little league baseball team. He was known for his famous grilled chicken which was served at many events in the Whittemore Community. After his retirement, the couple moved to Spirit Lake in April of 1997. David spent his retirement enjoying singing in the Choir at St Mary's Catholic Church, helping the Dickinson County Sheriffs office with the Trail Patrol, and working for the YMCA part time…. Left to cherish his memory is his daughter Mary Pat (Abe) Owen of Lexington, KY; four grandchildren…. Collin, Megan and Payton Owen of Lexington, KY and Connor Kollasch of Iowa City, IA, Brother Thomas Kollasch (Bev) of Maple River, IA., and Daughter in Law, Tammy Kollasch of Clive, IA. Brother in Law, Bob(Carol) Besch, Sisters in Law, Bev Sill, and Mary (Paul) Romberg and Many Nieces and Nephews. He was preceded in death by his parents, wife Betty and son Nicholas D. Kollasch, and Brother in Law Dennis Sill.

The family of David F. Kollasch created this Life Tributes page to make it easy to share your memories.

Send flowers to the Kollasch family.