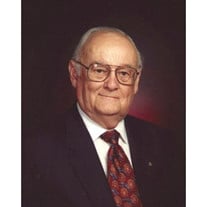 Dean W. Hess, age 93, of Okoboji, passed away Friday, October 30, 2015, at Avera McKennan Hospital in Sioux Falls, South Dakota. He was born on February 24, 1922, in Kingsley, Iowa, to Raymond and Clara (Manson) Hess. Dean was united in marriage to Betty Munson on June 26, 1949, in Boone, Iowa. Dean graduated from Kingsley High School in 1939, and Grinnell University in 1943. He served his country in the United States Army Air Corp. for two years, where he served as a flight instructor until he was honorably discharged. In 1947, Dean graduated from the University of Iowa Law School and immediately went to work for the Hess Law Firm until he retired in 1989. Dean was a member of the Airport Board, the Dickinson County Tax Commission, Lions Club, Masonic Lodge and Eastern Star, where he served as the Worthy Grand Patron of the state of Iowa. He enjoyed spending his spare time boating, golfing and traveling. Dean's true love was his family! Dean volunteered at the Gardner Cabin, the Maritime Museum and riding the trails for the Dickinson County Sheriff's Office. Dean is survived by his wife, Betty Hess of Okoboji; daughter, Ann Hess of Spirit Lake; sons, Craig Hess of Dallas, Texas, Scott Hess of Sarasota, Florida, and Mark Hess (Gary Wentzel) of Ft. Lauderdale, Florida; and a brother, Ray Hess (Kay) of Spirit Lake. He was preceded in death by his parents, Raymond and Clara. A funeral service will be held at 11:00 a.m. Thursday, November 5, 2015, at the United Methodist Church in Spirit Lake. Burial will be Thursday, at 4:00 p.m. at the Kingsley Cemetery in Kingsley, Iowa. Visitation will be held Wednesday, November 4, 2015, from 2:00 p.m. until 4:00 p.m. at the Schuchert-Lentz Funeral Home in Spirit Lake.

The family of Dean Hess created this Life Tributes page to make it easy to share your memories.

Send flowers to the Hess family.