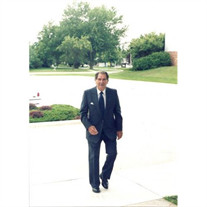 Delmer A. Nelson, age 87, of Wahpeton, passed away on Sunday, May4, 2014, at the Largo Medical Center in Largo, Florida. He was born on August 4, 1926, in Wichita, Kansas, to Arnold and Alice (Tedrick) Nelson. Del graduated from High School in 1944, and served his country in the United States Army from 1944, until 1946. When he returned from the service, Del earned a degree from the Wichita State University, graduating in 1950, while leasing and operating a Sinclair station. He was united in marriage to Thelma June Maure in 1950, and they had two children, Mark and Nancy. They lived in Iola, Kansas, Lincoln, Nebraska, and Cedar Rapids, before moving to Spencer. Del started Dyno Oil Company Inc. in 1958, with the purchase of a Sinclair service station and tankwagon service. His business expanded to Spirit Lake, in 1976, and added Convenience Stores in the 80's. At the time of his death, there were eleven Dyno's stores across Northwest Iowa. Del was united in marriage to Josephine Ditsworth in 1985. They enjoyed spending their winters in the Tampa Florida Area. Del served as a board member of the Petroleum Marketers of Iowa, was appointed to the Energy Council by Governor Robert Ray and received the "Bucket Box Award" in 1992, the highest honor given to a member of the Petroleum Marketers of Iowa. Del is survived by his wife, Jo Nelson of Wahpeton; his children, Mark (Nellie) Nelson of Spencer; and Nancy (Gene) Hassebroek of Sibley and Spirit Lake; Jo's children, Mark Ditsworth of Aurora, Colorado, Penny (Rick) Millspaugh of Grand Forks, ND, Chris Ditsworth of Largo, Florida, Amy (Dean) Gronmeyer of Spencer, Ann (Albert) Chiochon of Lake Park, and Brett Ditsworth of Largo, Florida; a sister, Jerrie Johnson of Wichita, Kansas; a niece, Lisa; a nephew, Tim; grandchildren, Garrett Nelson, Stefanie (Brandon) Kurtz, Emily Chiochon, Jacob Gronemeyer, Cassidy Ditsworth, Ben (Kristen) Chiochon, Molly (Jeff) Quintana and Tanna (Neil) Brothers; and great-grandchildren, Jackson, Lydia, Rylee, Tyler, Deuce and Tivona. He was preceded in death by his parents; sister, Joan Caldwell; an infant son; and a son-in-law, Richard Hartman. A funeral service will be held at 10:30A.M. Tuesday, May 13, 2014, at the United Methodist Church in Spirit Lake. Visitation will be held Monday, from 5:00P.M. until 7:00P.M. at the Schuchert Funeral Home. Burial will be at Memory Gardens Cemetery in Spirit Lake. In lieu of flowers, memorials may be given in Del's name. The Schuchert Funeral Home is in charge of the arrangements.

Delmer A. Nelson, age 87, of Wahpeton, passed away on Sunday, May4, 2014, at the Largo Medical Center in Largo, Florida. He was born on August 4, 1926, in Wichita, Kansas, to Arnold and Alice (Tedrick) Nelson. Del graduated from High School... View Obituary & Service Information

The family of Del Nelson created this Life Tributes page to make it easy to share your memories.

Send flowers to the Nelson family.