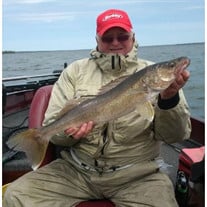 A memorial service for 73 year old Delmer Dau of Spirit Lake will be held at 11:00 a.m. on Wednesday, July 16, 2014, at Immanuel Lutheran Church in Spirit Lake. A memorial visitation will be held on Tuesday from 5:00 to 7:00 p.m. at the Schuchert-Lentz Funeral Home in Spirit Lake. Delmer Lee Dau, the son of Delbert and Vera (Meyer) Dau, was born on November 2, 1940 in Sutherland, Iowa. He graduated from Calumet High School in 1960. On June 19, 1960, Delmer was united in marriage with Sandra Hoger in Paullina, Iowa. He owned and operated Dau Construction. Delmer was an avid sportsman. He played basketball for the Calumet Indians and his team advanced to the State Tournament all four years of his high school career. In 1959, his junior season, Delmer paced the 29-1 Indians to a state championship. At one time or another during his career, Delmer held practically every State Tournament scoring record. Delmer passed up a full ride scholarship to play basketball at the University of Iowa to start his construction company. In 1983 he was inducted into the Iowa High School Basketball Hall of Fame. Delmer was also a great baseball player and played semipro baseball for the Paullina Lakers. Delmer also had a love for the outdoors and enjoyed camping, hunting, fishing and golf. Some of his favorite times were spent fishing at Leech Lake and elk hunting in Colorado. Delmer also enjoyed watching his grandchildren's sporting activities---he was always one of their biggest fans. Delmer passed away on July 9, 2014, at the Select Specialty Hospital in Sioux Falls, South Dakota. Left to cherish Delmer's memory is his wife of 54 years, Sandra; two sons, Douglas Dau and his wife September and David Dau and his wife Nancy all of Spirit Lake; six grandchildren, Drew, Adam, Alex, Emma, Erin and Cameron; one sister, Barbara Dau of Holstein; and three brothers, Roger Dau of Le Mars, Daniel Dau of Calumet and Lloyd Dau of Calumet. He was preceded in death by his parents. Condolences may be left at www.spirit lakefuneralhome.com.

A memorial service for 73 year old Delmer Dau of Spirit Lake will be held at 11:00 a.m. on Wednesday, July 16, 2014, at Immanuel Lutheran Church in Spirit Lake. A memorial visitation will be held on Tuesday from 5:00 to 7:00 p.m. at the Schuchert-Lentz... View Obituary & Service Information

The family of Delmer Dau created this Life Tributes page to make it easy to share your memories.

Send flowers to the Dau family.