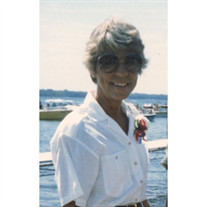 Diane Dowden, age 82, of Spirit Lake, passed away on Wednesday, January 6, 2016, at Hawkeye Care Center in Spirit Lake. She was born on November 19, 1933, in Exira, Iowa, to Adrian and Annette (Lohner) Corl. Diane's parents divorced soon after Diane's birth and she was raised by her mother and grandmother, Sena Lohner, for the first few years of her life. Her mother married Floyd Johnson several years later and they moved to Atlantic, Iowa. Diane graduated from Atlantic High School in 1952, and following graduation, she and three of her girlfriends traveled to the Iowa Great Lakes in search of summer employment. The girls became carhops at the newly opened Red's Drive In in Arnolds Park. It was during that summer that Diane met Fred, her husband to be. Fred and Diane dated during that summer and fell in love. Diane went to the University of Nebraska in the fall of 1952, and Fred went back to the University of South Dakota in the fall of 1952. The long distance romance continued throughout the winter and Diane returned to work at the Iowa Great Lakes in the summer of 1953. Fred dropped out of ROTC and that made him eligible for the draft. Uncle Sam required his service and Fred and Diane were married August 23, 1953, and Fred went into the Army in October. They were stationed at Fort Carson in Colorado and upon completion of their service, Fred returned to finish his college work at the University of Iowa. During that year at the University of Iowa, their daughter, Robin was born. Upon graduation, Fred's father asked that Fred return to Spirit Lake and help him sell his real estate and insurance agency, as he had a terminal illness. He sold it to his son. Diane and Fred have lived in Spirit Lake since that time. Diane was a stay at home mother for the first few years, but became a world-class gardener, both flowers and vegetables. When Robin started school, Diane worked for Fred in the real estate office and for her friend, Kay Ahrens, at the Clothes Peddler. Fred was one of the owners of Center Lake Village Mobile Home Court and when the partner that was managing the court died, Diane took over and ran the court for nearly twenty years. Diane loved animals and was a great friend of the elderly. She volunteered at the local humane society and was a staunch advocate for senior citizens, leading the capital campaign for the center they occupy today. A natural caregiver with an enormous heart, Diane spent many hours helping those in need. Diane is survived by her husband, Fred Dowden of Spirit Lake; her daughter, Robin Dowden of Corning, New York; and many friends. She was preceded in death by her parents. A memorial visitation for 82-year-old Diane Dowden of Spirit Lake will be held Tuesday, January 12, 2016, from 5:00p.m. until 7:00p.m. at the Schuchert-Lentz Funeral Home. In lieu of flowers, memorials may be given in Diane's name to the Senior Center in Spirit Lake or the Humane Society of Northwest Iowa. The Schuchert-Lentz Funeral Home is in charge of the arrangements.

The family of Diane Dowden created this Life Tributes page to make it easy to share your memories.

Diane Dowden, age 82, of Spirit Lake, passed away on Wednesday,...

Send flowers to the Dowden family.