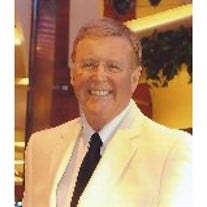 Dr. Richard Thomas Gamble, age 74, of Spirit Lake and The Villages, Florida, entered into eternal rest on Sunday, August 11, 2013, at Cornerstone Hospice in The Villages, Florida, after a long battle with Renal Cell Carcinoma. Dick was born on September 27, 1938, in Estherville, Iowa, to Gifford L. and Eunice M. (Thomas) Gamble. He spent his childhood in Spirit Lake, Iowa, and graduated from Spirit Lake High School in 1956, then went to Morningside College in Sioux City, Iowa, and graduated from the University of Iowa College of Dentistry in 1963. Dick served as a dentist in the United States Navy Dental Corps, assigned to the First Marine Division FMF Pacific stationed at Camp Pendleton, California. He then entered private practice of dentistry. Dick was united in marriage to Ann Louise Harms on June 24, 1961, in Alden, Iowa. They celebrated fifty years of marriage in 2011. Dick practiced family dentistry in Milford, Iowa, for two years and Cedar Falls, Iowa, until he retired in 1998. He was an active member and officer in many dental organizations including the Black Hawk Dental Society, the Waterloo District Dental Society and the Iowa Dental Association. He earned his Fellowship in the Academy of General Dentistry. Dick was active in many civic and charitable organizations, including Lions Club and Kiwanis. He was a member of the United Methodist Church in Spirit Lake and Cedar Falls, and the New Covenant United Methodist Church in The Villages, Florida. During his retirement years, Dick enjoyed bicycling, fishing, hunting, shooting sporting clays, woodcarving and traveling. Dick is survived by his wife, Ann Gamble of The Villages, Florida; son, Scott Richard Gamble, and his wife, Jolynn of Edina, Minnesota; daughter, Linda Ann (Gamble) Braly, and her husband, Damon of Prairie Village, Kansas; and four grandchildren, Madeleine and Reid Gamble of Edina, Minnesota, and Stella and Elizabeth Braly of Prairie Village, Kansas. He was preceded in death by his parents; his brother, Gordon Gamble; and his sister, Janice (Gamble) Clark. A memorial service will be held at 11:00A.M. Saturday, August 31, 2013, at the United Methodist Church in Spirit Lake. In lieu of flowers, memorials may be given to the University of Iowa Dental College or the Gamble/Thomas Scholarship at the United Methodist Church in Spirit Lake.

The family of Dick Gamble created this Life Tributes page to make it easy to share your memories.

Send flowers to the Gamble family.