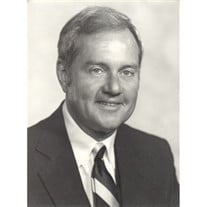 Richard H. Wolfe, age 85, of Arnolds Park, passed away Thursday, June 26, 2014, at Hilltop Care Center in Spirit Lake. He was born on September 9, 1928, in Des Moines, Iowa, to Harold and Lenna (Mariner) Wolfe. Dick graduated from Mason City High School in 1946, and enlisted to serve his country in the United States Army from 1946 until 1947. When he returned from the service, he enrolled at the University of Iowa, graduating in 1951, with his B.A. degree. Dick worked for JC Penney in their management program for over 30 years, before retiring in 1983. In 1983, he purchased Office Systems Company in Sioux City, where he had continued as the C.E.O. Dick was a member of Rotary, St. Alban's Episcopal Church, where he has been very active, and was active in many civic organizations in the Sioux City area prior to moving to the lakes area. He enjoyed spending his spare time golfing, hunting, riding horses and flying, as he was a private pilot early in his career. Dick's true passion in life was his wife, children and grandchildren! Dick is survived by his wife, Nancy Wolfe of Arnolds Park; daughter, Sue Robinson of Farmington, Missouri; son, Chic Wolfe, and his wife, Janet of Sioux City; five grandchildren, Josephine (Greg), Taylor, Alexa, Ally (Alex) and Jack; and great-grandchild, Silas. He was preceded in death by his parents, Harold and Lenna. A Celebration of Dick's life will be held at 1:00P.M. Thursday, July 3, 2014, at St. Alban's Episcopal Church in Spirit Lake. In lieu of flowers, memorials may be given in Dick's name to St. Alban's Episcopal Church. The Schuchert Funeral Home is in charge of the arrangements.

The family of Dick H. Wolfe created this Life Tributes page to make it easy to share your memories.

Send flowers to the Wolfe family.