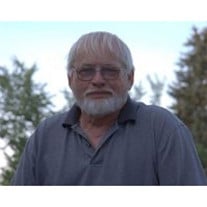 Donald D. Christians, age 69, of Milford, passed away Monday, September 24, 2012, at Lakes Regional Healthcare in Spirit Lake. He was born on August 14, 1943, in Sibley, Iowa, to Elmer and Gertie (Kruger) Christians. Don graduated from George High School in 1961. He married Faye Talsma in November of 1965, and they had two children, Dale and Sara. In July, of 1995, Don was united in marriage to Lois Johnson. After high school, Don worked for Sndengas Industries, before working for Berkley's for 33 years, retiring in 1999, as a warehouse technician. He loved spending his spare time fishing, working in his shop, riding motorcycles and was always known to fix anything! Don's true love was spending time with his family, especially his grandchildren. Don is survived by his wife, Lois Christians of Milford; two children, Dale Christians, and his wife, Leanna, of Castle Rock, Colorado, and Sara Breese, and her husband, Dustin, of Monument, Colorado; a step-son, Mike Mann, and his fiancé, Jenn Helmich, of Graettinger; sister, Sandra Johnson, and her husband, Graig, of Storm Lake; two brothers, Larry Christians, and his wife, Karen, of Sheldon, and Roger Christians, and his wife, Carol, of George; a step-sister, Donna VanIperan, and her husband, Ron, of Saro Sota, Florida; and seven grandchildren, Karisa (Josh), Rich, Alexis, Madison, Allie, Ethan and Benjamin. He was preceded in death by his parents; step-mother, Fran; father-in-law, Marvin "Bud" Johnson; brothers-in-law, John Spangler and Tim Mann; and his dog, Dusty. A memorial service will be held at 10:30A.M. Friday, September 28, 2012, at the Schuchert Funeral Home. In lieu of flowers, memorials, may be given in Don's name.

The family of Donald D. Christians created this Life Tributes page to make it easy to share your memories.

Send flowers to the Christians family.