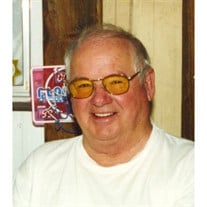 Donald L. Shupe, age 78, of Spirit Lake, passed away on Tuesday, July 23, 2013, at Lakes Regional Healthcare in Spirit Lake. He was born on February 15, 1935, in Sloan, Iowa, to Carl and Alta (Duncan) Shupe. Don graduated from Hornick High School in 1953. He served his country in the United States Air Force, as a member of the Strategic Air Command. Don was united in marriage to Orinda Tyson on October 13, 1957, in Louise, Texas. Don worked as a salesman for Sioux City Iron for many years. He enjoyed spending his spare time golfing, building model airplanes and watching western and war movies. Don was a member of the V.F.W. in Sioux Valley, Minnesota. Don is survived by his wife, Orinda Shupe of Spirit Lake; four children, Jay Shupe, and his wife, Sandra of Nashville, Tennessee, Sue Shupe of Spirit Lake, Maria Soto, and her husband, David of Tucson, Arizona, and Kelly Weltzin, and her husband, John of Harris; six sisters; two brothers; six grandchildren; and seven great-grandchildren. He was preceded in death by his parents; three sisters; and seven brothers. A graveside service will be held at a later date. The Schuchert Funeral Home is in charge of the arrangements.

The family of Donald Shupe created this Life Tributes page to make it easy to share your memories.

Send flowers to the Shupe family.