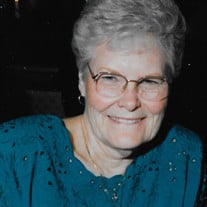 Dora Elizabeth (Pinkerton) Baum-Rooney, 85, of Spirit Lake, IA passed away Saturday, February 25, 2017. A Mass of Christian Burial will be at 10:30 a.m. Thursday, March 2, 2017 at St. Mary’s Catholic Church, in Spirit Lake with Father Brian Hughes officiating. Burial will be held at 2:30 p.m. Thursday in the Maryhill Visitation Cemetery, rural Cherokee, IA. There will be a Rosary lead by The Catholic Daughters at 3:30 p.m. Wednesday, March 1, 2017 at the funeral home with visitation to follow until 6:00 p.m. Arrangements are under the direction of Schuchert-Lentz Funeral Home in Spirit Lake, IA. Online condolences may be sent to www.spiritlakefuneralhome.com Dora was born the daughter of Perry Lyle and Edna Mildred (Morgan) Pinkerton on November 16, 1931 in Willow Township near Quimby, IA. She graduated from Quimby Consolidated School in 1950. She attended the Americana Beauty School in Des Moines and the Des Moines Area Community College. On July 6, 1950, Dora was united in marriage to Gerald Eugene Baum in Cherokee, IA. Gerald preceded her in death in 1999. On August 14, 2004 Dora was united in marriage to Dr. Joseph M. Rooney in Spirit Lake, IA. She was a member of St. Mary’s Catholic Church where she was a member of the Catholic Daughters of the Americas and Saint Joe Quilters. Dora enjoyed playing AAU Women’s Basketball and Bowling. Left to cherish Dora’s memory is her husband Dr. Joseph M. Rooney of Spirit Lake; children Dolores (Duane) Baum Engle of Saint Paul, MN; Sherry Baum Kennedy of Gulfport, MS; and Joseph L. (Luann) Baum of Des Moines, IA; four grandchildren; one great grandchild; and her brother Neal (Norma) Pinkerton of Kingsley, IA. She was preceded in death by her parents, brothers Dale Earl and Robert Dean Pinkerton.

The family of Dora Baum-Rooney created this Life Tributes page to make it easy to share your memories.

Send flowers to the Baum-Rooney family.