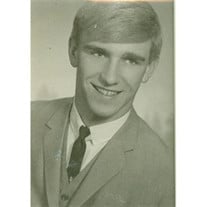 Douglas James Winkel, son of John Russell(Perry) and Bertha (Boyd) Winkel was born August 3, 1948, in Ashton, Ia. He attended school in Sibley, where he graduated from high school in 1966. He attended the body fender program at Dunwoody Institute in Minneapolis after graduating. In his youth, he enjoyed building go carts with his friends. He loved cars, working on their engines, doing body work and just plain driving them. In his lifetime, he worked building steel bins, helping lay brick and block, working for several car dealerships, as a Schwan's salesman and driving truck. One of his favorite pastimes was barbequing. He also enjoyed tinkering with machines and engines. He was a big Elvis fan. Doug had a very charismatic personality and could visit with anyone. He had a sharp and witty sense of humor. In 2005, Doug suffered a stroke and lived the last seven years at Lake Park Care Center, where he enjoyed teasing the staff and watching game shows. He passed away September 1, at the age of 64 years, after being diagnosed with cancer a month earlier. He was preceded in death by his parents, JR and Bertha Winkel. He is remembered by his wife Rosie; his sons, Brian(Jacqui) and their children, Maya and Elijah, Waterloo, Ia, Jed(Karey) and their children, Dani and Cooper, Spirit Lake, Ia, and Nathan, Iowa City, Ia; a brother, Steve(Kay) Winkel , Ashton Ia; along with nephews, cousins and friends. A Celebration of Doug's Life will be held Saturday, from 2:00P.M. until 4:00P.M. at Arrowwood Resort in the Pebble Beach Room. The Schuchert Funeral Home is in charge of the arrangements.

Douglas James Winkel, son of John Russell(Perry) and Bertha (Boyd) Winkel was born August 3, 1948, in Ashton, Ia. He attended school in Sibley, where he graduated from high school in 1966. He attended the body fender program at Dunwoody Institute... View Obituary & Service Information

The family of Doug James Winkel created this Life Tributes page to make it easy to share your memories.

Send flowers to the Winkel family.