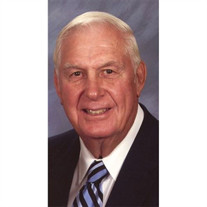 Dr. Ralph E. Woodard, 86, of Arnolds Park, Iowa, passed away February 5th in Sioux Falls, South Dakota at the Stanford Hospice Cottages. Born to Josephine and Ernest G. Woodard on September 17th, 1927. He attended school in Fort Dodge, Iowa and graduated from Fort Dodge High School in 1945. He lettered in football, basketball and baseball and received a football scholarship to the University of Iowa. Dr. Woodard played his first Big Ten football game at the age of 17. He was drafted into the US Army after his first year of college - the U.S. 7th Division- and was honorably discharged in 1947. Upon discharge, he returned to the University of Iowa to pursue a degree in medicine. He was a four-year starter with the Hawkeye Football Team. While at the University, he received several academic Merit Scholarships, the prestigious Nile Kinnick Scholarship and was named to the Omicron Delta Kappa medical scholarship fraternity. Following graduation from the University of Iowa, he married his high school sweetheart, Martha Jo Pray, on June 18th, 1950. They lived in Iowa City until 1954 when Ralph graduated from medical school. Martha and Ralph moved to Wayne County, Michigan for his internship at Wayne Co. General Hospital. Ralph was asked to return to the University of Iowa Hospital in Iowa City to complete a general surgical residency and thoracic surgery fellowship. Dr. Woodard was inducted as a fellow in the American College of Surgeons in 1964. He moved his family to Fort Dodge where he practiced general surgery for 36 years at Trinity Regional Hospital. Dr. Woodard was inducted into the Fort Dodge High School football Hall of Fame and elected as the Charter President of the Varsity Letterman's Club for the University of Iowa. He was honored by the Iowa High School Athletic Association for providing free annual physical assessments for all junior and senior high school students during the years he practiced medicine in Fort Dodge. Dr. Woodard retired from practice in 1995 and moved to Lake Okoboji where he loved to enjoy his family, a late afternoon swim and watch the Lake activity. He is preceded in death by his parents, Josephine and Ernst Woodard. He is survived by his wife, Martha; a brother, Richard Woodard; a daughter, Dr. Debra (Edward) Leners; daughter, Mary Ann (Don) Cousins; and son, Dr. Tom (Darci) Woodard. In addition, Dr. Woodard has seven grandchildren, Nevin (Sadie) Leners, Noah Leners, Kyle Cousins, Kirk Cousins, Karalyne Cousins, Jenna (Tom) Harmon and Nick Woodard; and a great-grandson, William Keith Leners. Services are scheduled as follows: A visitation service will be held at Schuchert Funeral Home in Spirit Lake, Iowa, Thursday evening, February 13th from 5:00pm to 7:00 pm. A visitation is also scheduled Friday, February14th, 1:00pm-2:30pm, with a service at 2:30pm at the First Presbyterian Church of Fort Dodge, Iowa. A memorial Celebration of the Life of Dr. R.E. Woodard will be held on February 15th from 11:00am to 12:00pm at the First Presbyterian Church of Spirit Lake, Iowa. In lieu of flowers, memorials may be directed to the First Presbyterian Church of Spirit Lake, Iowa.

The family of Dr. Dr. Ralph Woodard created this Life Tributes page to make it easy to share your memories.

Send flowers to the Woodard family.