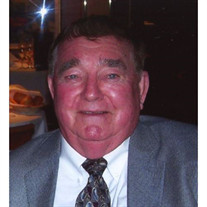 Duane Lowell Moser, son of Sam and Alice (Wynia) Moser was born February 1, 1938, near Lester, Iowa. He attended school in Lyon County and graduated in 1956, from Alvord High School. He served his country in the Naval Reserve. He attended the University of South Dakota for two years and then taught in Huron, South Dakota. Duane returned to USD and completed his degree in elementary education and taught in West Lyon. Upon completing his Masters Degree in Education, he became the elementary principal at Akron, Iowa. In 1965, he married Nancy Metcalf and they moved to Rock Rapids, Iowa. They became the parents of two boys, Chad and Jason and Duane became an active part in their lives. Duane became the elementary consultant for Lyon County in 1965. Later, he became the Superintendent of Lyon and Sioux County Schools and ultimately established AEA 4. He then left education and became vice president of Rock Rapids State Bank and retired in 1998. While living in Rock Rapids he served on the city council and was mayor for over twenty years, was a member of Jaycees and Kiwanis and was involved with the Hunter Safety Program. He and his wife Nancy then moved to Lake Okoboji in 1999. His love for education led him to substitute teaching in Lake Park. He spent his summers working at Brook's Golf Course. Duane enjoyed having his boys nearby as he spent time helping Jason on the farm and playing golf and being on the lake with Chad. His grandchildren were the apple of his eye. He is survived by his wife, Nancy; two sons, Chad, and his wife, Kimberly and Jason, and his wife, Melissa; grandchildren, Katie, Brooke, Molly, Maggie and Max, all of Spencer, Iowa; brother, Glenn, and wife, Connie of Wilmington, North Carolina; sister-in-law, Mildred Moser of Wentworth, South Dakota; sister-in-law, Susan Rierson, and her husband, Richard of Bonita, California; brother-in-law, John Metcalf, and his wife, Dana of Dickens, Iowa; along with many nieces and nephews. He was preceded in death by his parents; brother, Eugene; and infant son, Judson. A funeral service will be held at 11:00A.M. Friday, October 4, 2013, at the First Presbyterian Church in Spirit Lake. Visitation will be held Thursday, from 5:00P.M. until 7:00P.M. at the Schuchert Funeral Home. Burial will be at Riverside Cemetery in Spencer. In lieu of flowers, memorials may be given in Duane's name.

Duane Lowell Moser, son of Sam and Alice (Wynia) Moser was born February 1, 1938, near Lester, Iowa. He attended school in Lyon County and graduated in 1956, from Alvord High School. He served his country in the Naval Reserve. He attended the... View Obituary & Service Information

The family of Duane L. Moser created this Life Tributes page to make it easy to share your memories.

Send flowers to the Moser family.