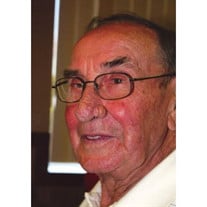 E. John Ferguson, age 84, of Spirit Lake, died on Sunday July 6, 2014 at the Hilltop Care Center in Spirit Lake. Funeral Services will be 11:00 am Wednesday at the Methodist Church in Spirit Lake, with Rev. Lon Lewis officiating. Visitation will be held Tuesday, from 5:30P.M. until 7:30P.M. at the Schuchert-Lentz Funeral Home in Spirit Lake. Burial will be in the Laurens Cemetery, with military rites conducted by the VFW Post #3533 of Laurens. Eldon John Ferguson, the son of Earl and Gladys (Grice) Ferguson, was born on June 22, 1930 in Laurens, Iowa. He graduated from Laurens High School in 1949. John served in the U.S. Army and was stationed in Germany during the Korean War. On June 9, 1951 John was united in marriage with his high school sweetheart Ruth Davidson at the Laurens Methodist Church. John and Ruth farmed north of Laurens for a number of years. He starting buying fat cattle for IBP in 1963 and became a well known buyer for Spencer Foods. He introduced his son Jeff to the cattle business and remained interested and involved in the cattle market until his death. In his 60's, John started and developed a successful pilot car business and remained active in his business until the age of 80. John was a member the American Legion and VFW and was the past Master of the Grace Masonic Lodge in Laurens. He helped coach Little League baseball and was a 4-H leader for many years. John enjoyed fly fishing trips to Bozeman, MT with his two sons, watching his grandchildren play sports, Iowa and Iowa State Basketball, watching and playing golf and dancing with his wife Ruth. Left to cherish John's memory is his wife of 63 years, Ruth; two sons, Jeff Ferguson and his wife Barb of Bozeman, MT and Dr. Steven Ferguson and his wife Lisa of Dakota Dunes, SD; three grandchildren, Austin, Tanner and Taylor Ferguson; and two brothers, Arnold Ferguson of Tacoma, WA and Robert (Phyllis) Ferguson of Ames; and numerous nieces and nephews. He was preceded in death by his parents and two brothers, Don and Dale Ferguson. Condolences may be left at www.spiritlakefuneralhome.com. Memorials may be made in John's name to the American Cancer Society.

The family of E. John Ferguson created this Life Tributes page to make it easy to share your memories.

Send flowers to the Ferguson family.