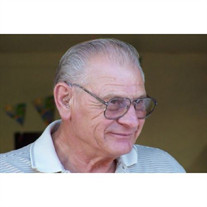 Edwin Martin Kabele age 78, of Spirit Lake, passed away Tuesday, April 22, 2014, at his home in Spirit Lake. He was born on October 11, 1935, in Jackson County Minnesota to Christian & Mary ( Kadarbek) Kabele. The family lived on a small acreage in Jackson County until Ed was 15 years old. He moved to Spirit Lake and worked at Stoller Fishery for eleven years. Ed was united in marriage to Alice Mae Hupp on November 19, 1955, in Estherville, Iowa. Ed worked for the John Morrell Packing Plant in Estherville for 7 years. In 1968, Ed and Alice opened Kabele's Trading Post. Alice ran the store with their three girls over the years, while Ed seined all his bait, trapped fur and also started buying fur. In 1978, Ed and Alice expanded Kabele's Trading Post for the Fur and Turtle Business. In the summer, Ed seined bait for his business, trapped turtles dressed them and sold the meat. In the winter, he bought fur. Over the last 15 years or so, Ed bought fur for Groenewald Fur and Wool Company based in Foreston, Illinois. Later, in 2004, Ed and Alice sold Kabele's Trading Post. Ed continued the Fur and Turtle Business until 2011, when due to poor health they sold the fur business. Ed loved to hunt, fish and trap. In his spare time he trapped fur and turtles. He fished many States and hunted out West every fall. He loved what he did and did what he loved, all of his life. Ed was preceded in death by his daughter, Kathryn; sister, Darlene; his parents; and father-in-law and mother-in-law. He is survived by his wife, of 59 years, Alice Kabele; daughters, Karrie Ferguson of Spirit Lake, and her children; Tyler Ferguson of Denver Colorado, and Abby Ferguson of Spirit Lake; Sharon Tyson, and her husband, Tyrone, and her daughters, Rachel & Whitney Watkins all of Everett, Washington; his granddaughter, Elizabeth Green (Kathryn's daughter) of Lake Stevens, Washington; brother, Chris Kabele Sr., and his wife, Shirley of Spirit Lake; and a special nephew, Chris Kabele Jr., and his wife, Laura of Spirit Lake; and many other nieces and nephews. A heartfelt "Thank You" to Fred & Jane Johnson, Mike & Karrie Mazur for all the things they did for and with Ed over the past few years when he was battling cancer. Especially, when they took him fishing!!!! A funeral service will be held at 10:30 A.M. Friday, April 25, 2014, at St. Alban's Episcopal Church in Spirit Lake. Visitation will be held Thursday, from 5:00P.M. until 8:00P.M. at the Schuchert Funeral Home. Burial will be at Lakeview Gardens Cemetery. In lieu of flowers, memorials may be given in Ed's name.

Edwin Martin Kabele age 78, of Spirit Lake, passed away Tuesday, April 22, 2014, at his home in Spirit Lake. He was born on October 11, 1935, in Jackson County Minnesota to Christian & Mary ( Kadarbek) Kabele. The family lived on a small... View Obituary & Service Information

The family of Ed Kabele created this Life Tributes page to make it easy to share your memories.

Send flowers to the Kabele family.