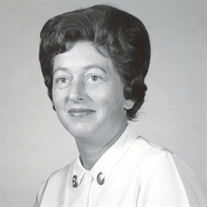 Funeral services for 90 year old Eireen Notestine of Okoboji will be 10:30 AM on Saturday at Schuchert-Lentz Funeral Home in Spirit Lake. Visitation will be 9:30 am until service time on Saturday at the Schuchert-Lentz Funeral Home in Spirit Lake. Eireen Knudsen was born March 13, 1926, in Dannebrog, Nebraska, to Otto and Dagny (Nissen) Knudsen. She was baptized at birth by her father Otto and was later confirmed in the Lutheran faith. She was raised in the Lutheran Church and was actively involved in the church for many years, singing in the choir. Eireen Moved with her family to Denver, Colorado, Boone, Iowa , and finally to Eagle Grove, Iowa. She graduated from Eagle Grove High School in 1943. After high school she continued her education at Immanuel Hospital School of Nursing in Omaha, Nebraska, where she fell in love with nursing. While she was a student at Immanuel, she enlisted in the Cadet Corps, anticipating she might serve in the Army after graduation. However, by the time she graduated in 1947, the war had ended and it was not necessary for her to serve. While in high school, Eireen met and dated Dick Notestine and after graduation from Immanuel, she and Dick married. They lived in Eagle Grove for several years before moving to Okoboji, Iowa, on January 1st, 1970. Eireen was hesitant to move away from Eagle Grove, but soon grew to love living at the lake. Eireen and Dick are the parents of son Thomas (Molly) Notestine of Kansas City and daughter Patricia Notestine (deceased). They are the grandparents of Aaron (Ashley) Notestine, Amanda Notestine Chisholm, Andrea Notestine, Andrew (Christy) Notestine and Jaden Notestine. They have 8 great grandchildren. Eireen was a well-loved school nurse for many years, first in Eagle Grove and then in Spencer, Iowa. She was instrumental in starting a health education program for elementary students in 1975 that utilized new, detailed teaching methods to demonstrate to students the impact on the body of such things as smoking or drinking. Eireen wanted to share her love of nursing with students and encourage students to consider nursing as a career. To do that, she started the first Future Nurses Club at the high school in Eagle Grove. Over the years the Club evolved into the Health Careers Club. She influenced many students to pursue careers in the medical field. Even after retiring, Eireen continued to help out as school nurse in Spencer and in Spirit Lake. She kept her nursing license until she was 85 years old! Eireen was initiated into the PEO Sisterhood in Chapter EJ Eagle Grove and was a member of Chapters in Spencer and Spirit Lake. Eireen enjoyed volunteering at the Pearson Lakes Art Museum in recent years. Eireen had many good friends and always enjoyed hosting parties, playing bridge, playing golf and, in later years, playing mah jong. She was a voracious reader often finishing several books in a week’s time. Eireen was a kind and generous friend. She had a wonderful sense of humor and truly loved life. One highlight of her life was a trip to Denmark she had with her daughter Patricia. She was very proud of her Danish heritage and flew the Danish flag with the American flag outside the house. She was also proud of her family and cherished any time spent with her family. The entire family knew that when it was time to say “good bye,” there would be tears. Even if it was only going to be for a few days. Eireen never wanted that family time to end. As Eireen’s health failed over the last several months, she was lovingly cared for by her husband of 69 years, Dick. In October, she moved to Hawkeye Care Center in Spirit Lake and passed away on December 14th at the age of 90 with Dick at her side. Eireen was preceded in death by her parents, her daughter Patricia, and sister-in-law Mary Claire Knudsen. She is survived and lovingly remembered by her husband, Dick, son and daughter-in-law Tom and Molly Notestine, grandchildren, Aaron, Amanda, Andrea, Ashley, Andrew, and Jaden and 8 great grandchildren. She is also survived by brothers Donald Knudsen, Rodney (Bev) Knudsen, Jerry Knudsen, and Roger (Nancy) Knudsen and sister Kaaren (Michael) Nelson, many nieces and nephews and a host of friends.

The family of Eireen Notestine created this Life Tributes page to make it easy to share your memories.

Send flowers to the Notestine family.