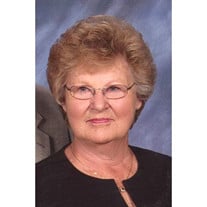 Elayne I. Hummel, age 79, of Spirit Lake, passed away Tuesday, September 10, 2013, at Avera-McKennan Hospital in Sioux Falls, South Dakota. She was born on March 2, 1934, in Sibley, Iowa, to Victor and Ida (Pater) Stanton. Elayne was raised in Spirit Lake, and graduated from Spirit Lake High School in 1952. She was united in marriage to Dean Hummel on April 20, 1955, in Spirit Lake. Elayne helped with the family farm and cooked meals for a lot of hardworking men. Elayne was a member of P.E.O. and Immanuel Lutheran Church, where she helped with the Ladies Circle. She enjoyed spending her spare time baking, reading, cooking, cleaning, golfing, boating, playing bridge, and attending her family's activities. Elayne was known for opening her house to entertain friends and family. Elayne is survived by her husband, Dean Hummel of Spirit Lake; daughter, Cheryl Hummel Ihry, and her fiancé , John of Phoenix, Arizona; two sons, Dan Hummel, and his wife, Jane of Spirit Lake, and Todd Hummel, and his wife, Becky of Spirit Lake; a sister, Evelyn Lucken of St. Louis, Missouri; six grandchildren, Joe (Emilia) Hummel, Jim (Ashley) Hummel, Jon (Shanda) Hummel, Lauren (Justin) Hanson, Sara Hummel and Scott Hummel; two great-grandchildren, Jackson and Kalvin; and many nieces and nephews. She was preceded in death by her parents; her step-father, Edward McMahon; and a brother-in-law, Robert Lucken. A memorial service will be held at 10:30A.M. Friday, September 13, 2013, at Immanuel Lutheran Church in Spirit Lake. Visitation will be held Thursday, from 4:00P.M. until 6:00P.M. at the Schuchert Funeral Home. Burial will be at Memory Gardens Cemetery. In lieu of flowers, memorials may be given in Elayne's name. The Schuchert Funeral Home is in charge of the arrangements.

Elayne I. Hummel, age 79, of Spirit Lake, passed away Tuesday, September 10, 2013, at Avera-McKennan Hospital in Sioux Falls, South Dakota. She was born on March 2, 1934, in Sibley, Iowa, to Victor and Ida (Pater) Stanton. Elayne was raised... View Obituary & Service Information

The family of Elayne Hummel created this Life Tributes page to make it easy to share your memories.

Send flowers to the Hummel family.