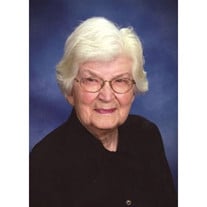 Eleanor Daniel, age 91, of Spirit Lake, passed away on January 22, 2016, in Gadsden, Alabama. She was born on January 29, 1924, in Spirit Lake, to Herman and Margaret (Moses) Graesing. Eleanor graduated from Spirit Lake High School in 1942. She was working in a small café when the news broke about Pearl Harbor. Being from a small town, she wanted to help in the war effort, moving to California and went to work for Consolidated Vultee Aircraft Company. Eleanor met her husband, Burney Daniel in November of 1943 and was united in marriage in February of 1944. Burney also worked for the Consolidated Vultee Aircraft Company, before being called and deferred three times. Finally he decided it was time for him to serve his country. While Burney was deployed, Eleanor worked laundry at Camp Sibert in Alabama and the B-29 factory in Georgia. When the war ended, Eleanor moved to Alabama and then to Spirit Lake, until Burney was honorably discharged. Eleanor worked for Dr. Clayton as a nurse for 33 years in Spirit Lake. She was active helping with the Boy Scouts, knitting, gardening and the Ladies Auxiliary. Eleanor was known as the "Queen of Pop Tabs" for the amount of pop tabs she collected for the Ronald McDonald House. She was also a part of the Rosie the Riveter/ WWII Home Front National Historic Park that was established to tell the stories of America's home front during World War II and its impact on American Culture. Eleanor is survived by her two sons, Darrell Daniel, and his wife, Debbie of Gadsden, Alabama, and Darwin Daniel, and his wife, Pat of Spirit Lake; sister, Ruth Cook of Spirit Lake; five grandchildren, Kristi (Joe) Boken, Kari Karnes, Billie Karnes, Mitchell Roberts and Jennifer (Avery) Gibbs; and nine great-grandchildren. She was preceded in death by her parents; her husband of 56 ½ years, Burney; and two brothers, Harold and Howard. A memorial visitation will be held on Thursday, February 25, 2016, from 4:00 P.M. until 6:00 P.M. at the Schuchert-Lentz Funeral Home. In lieu of flowers, memorials may be given to the Ronald McDonald House in Sioux Falls, South Dakota. The Schuchert-Lentz Funeral Home is in charge of the arrangements.

Eleanor Daniel, age 91, of Spirit Lake, passed away on January 22, 2016, in Gadsden, Alabama. She was born on January 29, 1924, in Spirit Lake, to Herman and Margaret (Moses) Graesing. Eleanor graduated from Spirit Lake High School in 1942.... View Obituary & Service Information

The family of Eleanor Daniel created this Life Tributes page to make it easy to share your memories.

Eleanor Daniel, age 91, of Spirit Lake, passed away on January...

Send flowers to the Daniel family.