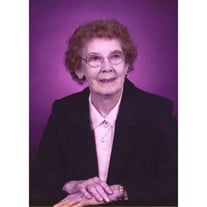 Ellen May Hassebroek, 96, was born December 8, 1917 on a farm near Little Rock, IA to Albert and Marie (Voss) Kruse. She was baptized at the Reformed Church in Little Rock, and attended a small country school just over the border into Minnesota (District 115). Ellen met Wayne Hassebroek at a dance when she was still in her teens. On December 14, 1938, the couple was married on her parent's farm. After marriage the couple made their home on a farm Northwest of Sibley. In the early days of their marriage, Ellen worked alongside Wayne on the farm. The couple raised two children, Wanda and Gene. She raised chickens, sold eggs, and kept a large garden. She canned a large portion of the family's food; vegetables, fruits, and meat. She was a skilled baker as well, known for her cookies, bars, cakes, and her exceptional chocolate cream pie. In 1966, her love of cooking led to a job in the lunch department of the Sibley School system. She later became the head cook of the Sibley (later Sibley-Ocheyedan) schools. She held this position until 1998, retiring at the age of 81, after 32 years with the school system. In 2000, Ellen moved full time to her lake home in Okoboji. She filled her days with baking, cooking, and visiting friends and neighbors. She resumed an early hobby of embroidery and was known for her beautifully stitched towels. Active until only a few months before her death, Ellen passed away peacefully in her sleep at home on Tuesday, November 11, 2014. Survivors include her daughter, Wanda Rockman of Okoboji; son, Gene (Nancy) Hassebroek of Spirit Lake; brother, Harm Kruse of Rapid City, SD; 3 grandsons and 5 great grandchildren; as well as many other relatives, and close family friends. She was preceded in death by her parents; husband, Wayne; brother, Ben; and an infant son, Duane. Funeral services will be held on November 15, 2014 at 3:00 p.m. at Schuchert-Lentz Funeral Home in Spirit Lake. Visitation will precede the service from 1-3 pm. A private burial will be held at Holman Township Cemetery in Sibley at a later date.

Ellen May Hassebroek, 96, was born December 8, 1917 on a farm near Little Rock, IA to Albert and Marie (Voss) Kruse. She was baptized at the Reformed Church in Little Rock, and attended a small country school just over the border into Minnesota... View Obituary & Service Information

The family of Ellen Hassebroek created this Life Tributes page to make it easy to share your memories.

Send flowers to the Hassebroek family.