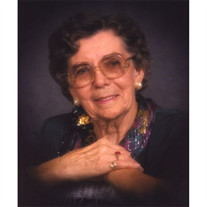 Erma L. Werner, age 94, of Spirit Lake, formerly of Sioux Valley, Minnesota, passed away on Sunday, January 11, 2015, at Sanford Hospital in Jackson, Minnesota. She was born on August 28, 1920, in Lakefield, Minnesota, to Arthur and Minnie (Krahn) Oelke. Erma was united in marriage to Harry Werner at Saint Peter's Lutheran Delafield Church on February 14, 1943, in Lakefield, Minnesota. Erma had been baptized and confirmed in the same church. After husband Harry's army discharge they farmed in the Lakefield area followed by a move to Sioux Valley in 1951 where they continued to farm until 1973. Upon retirement they moved to a lake house on East Okoboji in Spirit Lake. Along the way Erma also worked at Berkeley's in Spirit Lake for 10 years. Erma was a member of the V.F.W. Auxiliary, American Legion Auxiliary, Hospital Auxiliary, the Volunteer Action Center and the Garden Club. She enjoyed spending her spare time gardening, camping, fishing, traveling, painting ceramics, crocheting, embroidering, cooking, and refinishing furniture. Her true passion in life was her family! Erma is survived by her three children, Ron Werner, and his wife, Kay of Arroyo Grande, California, Cheryl Mier, and her husband, Walt of Spirit Lake, and Judy Salzwedel, and her husband, Mark of Spirit Lake; sister Verna Gentry, and her husband, Warren (Lefty) of Okabena; four grandchildren, Dawn, Ryan, Kristen and Brett; two great-grandchildren, Madison and Chloe; one great-great-grandson, Gerard; sister-in-law, LaVerne Werner of Lakefield, Minnesota; and many nieces and nephews. She was preceded in death by her parents; her husband; and two brothers, Darald and Earl (Bud); baby sister, Shirley; brother-in-laws Lester and William Werner; and sister-in-laws Lucille and Velma Oelke. A funeral service will be held at 10:30A.M. Monday, January 19, 2015, at Grace Lutheran Church in Spirit Lake. Visitation will be held Sunday, January 18, 2015, from 2:00P.M. until 4:00P.M. at the Schuchert-Lentz Funeral Home. Burial will be at Memory Gardens Cemetery in Spirit Lake. In lieu of flowers, memorials may be given in Erma's name. The Schuchert-Lentz Funeral Home is in charge of the arrangements.

Erma L. Werner, age 94, of Spirit Lake, formerly of Sioux Valley, Minnesota, passed away on Sunday, January 11, 2015, at Sanford Hospital in Jackson, Minnesota. She was born on August 28, 1920, in Lakefield, Minnesota, to Arthur and Minnie (Krahn)... View Obituary & Service Information

The family of Erma Werner created this Life Tributes page to make it easy to share your memories.

Send flowers to the Werner family.