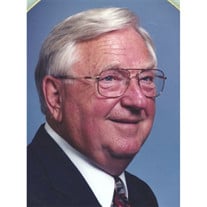 Ernest Lunblad "Sam" Andersen was born on September 8, 1922, in Webb, Iowa. He was the fifth of six gregarious children born of Hartman and Anna (Lunblad) Andersen. Sam, a full-blooded, first-generation Dane, was proud of his family, his heritage and his country. Sam and his siblings made the very best of having nothing in an era where nothing was all that anyone had. His favorite childhood memories include walking ten miles uphill to the Gillette Grove School (both ways), swimming and playing on the shores of the Little Sioux River, working alongside his Dad in the Gillette Grove General Store and Post Office, and generally having fun with his family and his classmates. Sam graduated from Gillette Grove High School in 1939, after which he enlisted in the US Army Infantry and served in WWII. He was deployed to Italy where he served as a bugler and a mail clerk. He told stories of delivering the post to his friends on the front line, and of "capturing" an Italian platoon (who, in reality, immediately threw their guns down and their hands up in surrender upon sight of the oncoming Americans.) He received an honorable discharge and returned to Gillette Grove with his new bride, Hazel Lee Edelen in 1945. Sam and Lee "were fruitful and multiplied," having six children between 1946 and 1963. During these years, Sam supported his growing family by working for Gus Glaser Meats, driving a meat truck from one small Northwest Iowa town to the next, selling beef, pork and deli meats to local store owners. His family moved to several Northwest Iowa communities before settling in Spirit Lake in 1953. Sam went to work as the general manager for Stoller Fisheries until his retirement in 1988. In addition to his day job, Sam partnered with Reed Potter to found and operate the Okoboji Pancake House. Besides the extra income, the restaurant provided employment and instilled the work ethic in all six of his kids. Sam and Reed also founded several miniature golf course/entertainment centers in Iowa and Minnesota. In 1985, Lee was diagnosed with pancreatic cancer. Sam attended her at home until her death in 1989. Two years later, he courted and married Darlene Frahm. Sam and Darlene found great companionship in doing the things they loved most, including traveling and entertaining. Sam, a great lover of music, the Big Band sound in particular, loved to dance and regularly swayed at local Big Band concerts. He was an active member and supporter of the local VFW post 4514. Sam loved animals and they loved him back. He also enjoyed golf, singing along with Marie Heath at the New Inn, spending time with his family and friends, fried chicken, and a hearty belly-laugh. Sam also loved his church. He was a member of Grace Lutheran Church in Spirit Lake, where he held various board positions through the years. The Lord blessed Sam with a beautiful voice, which Sam poured back to Him in praise and worship within the church choir for over five decades. Sam went Home on July 26, 2015. He was preceded in death by his parents, his two brothers (Erling and Carlo), his three sisters (Lily, Marguerite and Jeanette), and his first wife, Hazel Lee. He is survived by his six loving children: Michael (Linda) and Douglas (Janice) Phoenix, AZ; Marcia (Bill) Sexton, Spirit Lake; Debra Andersen, Hilo, HI; Lisa (Gregg) Boeke, Lakeville, MN; Leslie (Christopher) Whitehair, Gretna, NE. He is also survived by thirteen grandkids, six great grandkids and his second love, Darlene Andersen. He will be remembered by all who truly knew him as a man of great faith, integrity, honor and deep, unshakable love. We will miss his twinkly blue eyes and his joyful (and mischievous) countenance, but we know that he will live on in our memories, as well as in our hearts. A memorial service will be held at 11:00 A.M. Friday, July 31, 2015, at Grace Lutheran Church in Spirit Lake. Visitation will be held one hour prior to the service at the church. The Schuchert-Lentz Funeral Home is in charge of the arrangements.

Ernest Lunblad "Sam" Andersen was born on September 8, 1922, in Webb, Iowa. He was the fifth of six gregarious children born of Hartman and Anna (Lunblad) Andersen. Sam, a full-blooded, first-generation Dane, was proud of his family, his heritage... View Obituary & Service Information

The family of Ernest "Sam" Andersen created this Life Tributes page to make it easy to share your memories.

Send flowers to the Andersen family.