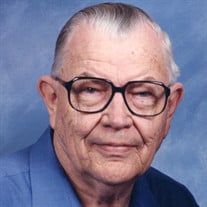 Ernest William Wilcke, 92, survivor of World War II, of Spirit Lake passed away on Thursday, December 21, 2017 from a brief illness at Lakes Regional Health Care in Spirit Lake. Funeral services will be held at 2:00 p.m. Wednesday, December 27, 2017 at Grace Lutheran Church in Spirit Lake with Dr. Martin Lucin officiating. Military funeral honors will follow the service presented by the American Legion Timpe Post #23 and John W. Kidd VFW Post 4514. Military Graveside Rites will be held in the Clinton Lawn Cemetery in Clinton, Iowa. The Schuchert-Lentz Funeral Home in Spirit Lake is in charge of arrangements. Online condolences may be sent to www.spiritlakefuneralhome.com Ernest was born on March 29, 1925 near Preston, IA. He graduated from high school in Preston and went to Wartburg College. He entered the U.S. Marines in 1942. There he served in the Battle of Iwo Jima and Okinawa where he rose to the rank of Corporal. He served aboard the USS Iowa at the signing of the Peace Treaty. After his honorable military discharge, he returned to Wartburg College and graduated in 1948. He taught 2 years of High School History in Tama, IA and Timberlake, SD. He then entered Drake Law School graduating in April of 1953. On August 15, 1954, he was united in marriage to Elaine Hillmann of Grinnell, IA. He first started working as a Claims Adjuster for the Iowa Farm Bureau. In 1956, he became the Claims Manager for the Farmers Mutual Reinsurance of Grinnell, IA. In 1960, he entered law practice with K.B. Welty. In 1980, he opened his own law practice and served as a well-practiced lawyer until his death. Ernest was an avid hunter and fisherman. His “Buddies” were his dogs Caesar, Palladin and Caudy. He gave 29 years of service as a member of the board of Trustee of St. Luke Lutheran Home in Spencer, IA from its inception. He served a term as a President of Rotary. He also served several positions at Grace Lutheran Church. At the time of his death, he was currently serving as a Legal Adjutant for Spirit Lake VFW. Ernest also served on the Iowa State Bar Assoc., Iowa Association for Justice, Iowa Academy of Trial Lawyers, Iowa Association of Workers’ Compensation, American Association for Justice, and the Workers Injury Law & Advocacy Group. Left to mourn are his wife, Elaine of Spirit Lake; son, Victor of Spirit Lake; many cousins, nieces and nephews. In lieu of flowers, memorials may be given to Grace Lutheran Church in Spirit Lake, Southern Poverty & Law Center or the Student Law Education Fund.

The family of Ernest W. Wilcke created this Life Tributes page to make it easy to share your memories.

Send flowers to the Wilcke family.